Fish Tales: I watercooled my Vive

Scott was right. Beat Saber is awesome. My story starts last year at the TR BBQ. It was the Friday night before the BBQ and the early gerbils had gathered for the traditional pre-BBQ pizza dinner. Scott was frenziedly detailing mechanical keyboard switch lubrication philosophies, but at some point during his gesticulated raving he passed along a recommendation: “You should really try Beat Saber, it’s awesome.” The timing wasn’t ideal; I had just moved my PC into our basement, postponing the use of VR in our household until it emptied out a bit.

Fast forward almost exactly one year. Our youngest had doubled in age and something resembling normality appeared to be within our reach. Time exists again. We decided to have some friends, who would definitely appreciate the Vive being up and running, over. So, with the space already cleared, I took about 20 minutes and set it back up the night before the visit. I was impressed, a ton of new VR content has come out since I’d last fired up the system. But, remembering Scott’s words, the only new game I bought was Beat Saber.

I’ll summarize Beat Saber as Fruit Ninja meets Dance Dance Revolution in VR. You can leave the rest to your imagination or you can watch the demonstration above for a better idea. I snuck in one song the night I got the Vive back online and just a few seconds after the music started, I was grinning ear to ear. After that first session, our guests dominated VR time over the weekend, and I didn’t get a chance to play again until Monday night. I played for about half an hour and boy did I get warm. That’s when inspiration struck.

We’re going to move quickly from here, because the idea is so simple that exposition is superfluous. You’ve probably already figured it out just from the YouTube thumbnail above. My goal was to replace the foam face pad in my Vive with a cooling loop. Here’s the recipe: submersible pump, bucket of ice water, 1/4″ vinyl tubing, and a bit of terrible sewing. See where this is going? 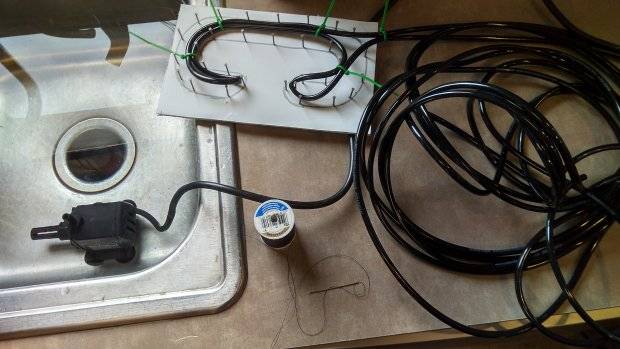 I traced the existing face pad onto a board and tapped nails in around the line to make a form for the tubing. Then I used zip ties to roughly keep it in shape. After that, a trip into some boiling water made the frustratingly spunky tubing quite complaisant. A trip into cold water locked it in place and allowed me to make sure the tubing wasn’t kinked in the pair of tight turns where my nose needed to go.

For attaching the monstrosity to my headset, I needed to combine it with a substrate that could interface with the hook (don’t say Velcro) inside the Vive. I happened to have some polyester reinforced vinyl with napped tricot laminated to one side laying around, but a buck of felt from a craft store would have worked fine too. 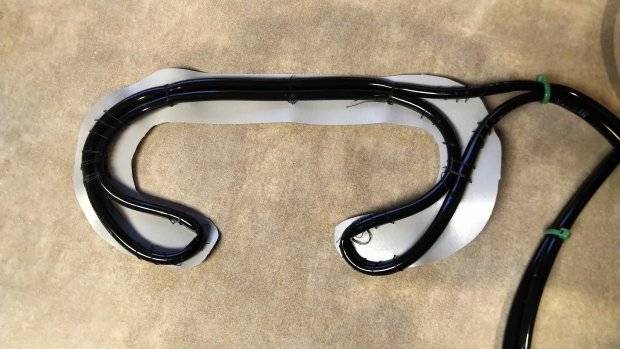 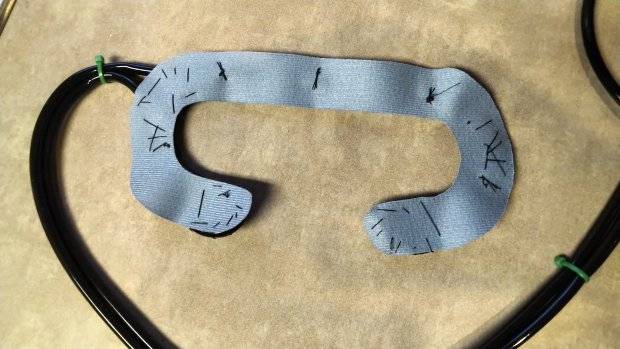 In the most time-consuming part of the entire project, I took needle and thread to my creation and worked my way around to secure the tubing to the fabric. It’s not pretty, but it got me there. If you’re curious, this is the kind of sewing machine made for this kind of work. Old-school was good enough for me, though. 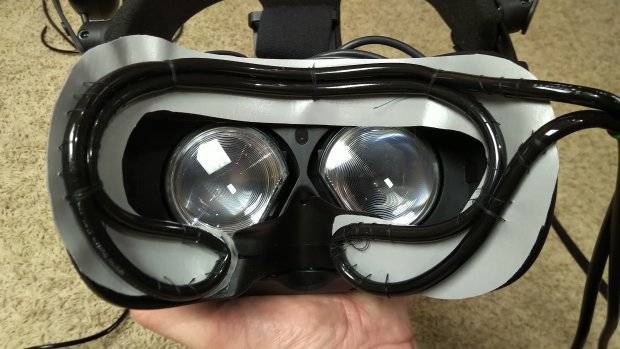 Placed inside the headset, the blue woven side of the fabric stuck to the hook well enough to proceed. I zip-tied the tubing along the cabling that already ran from my PC to the headset and it became quite manageable. There was only one step left, now. 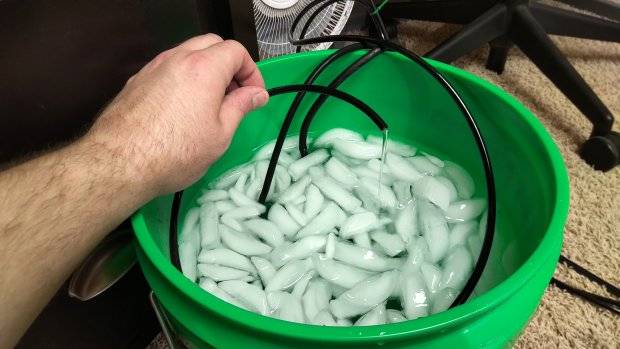 I plugged one end of the tubing into my pump and tossed it into the ice bucket. After plugging the pump in, it took a minute or so for water to flow out the other end of the tube. I was not treating my pump well. It’s rated for 160 GPH but the diameter and length of the tubing had restricted it down to 3.5 GPH. According to some rough math, that’s still about ten times as much liquid moving though the tube as my body could sweat out in the same amount of time—this might just work. 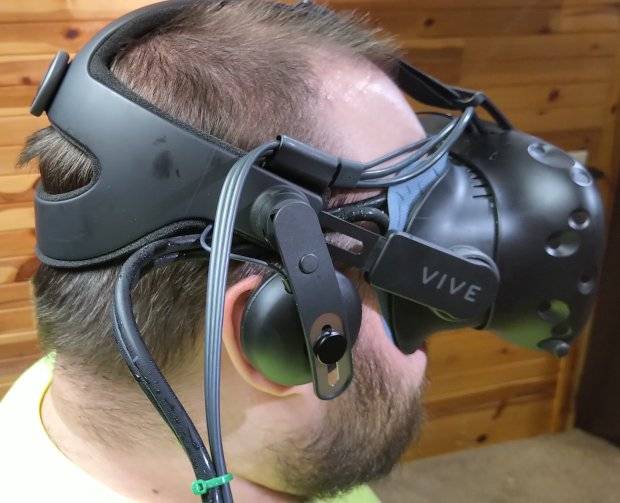 It did work! Far better than such a hack-job had any right to in my opinion. I tested it out first and was immediately impressed by how well such a small amount of flow kept my forehead and upper-cheeks cool. Comfy stuff. Maybe the ice was cheating, but I was going for maximum effect with the first test. I played through a few songs and when I took the headset off, my face was cold to the touch. Not bad for a couple hours of time and few bucks of materials.

Alex, official TR BBQ bubble guy, tried it out next and played for something like 20 minutes. While we both agreed that the added weight of the water-filled tubing was noticeable, neither of us thought it detracted from gameplay. I’ll go so far as to say that it was a small price to pay for the chill factor, which was quite welcome. 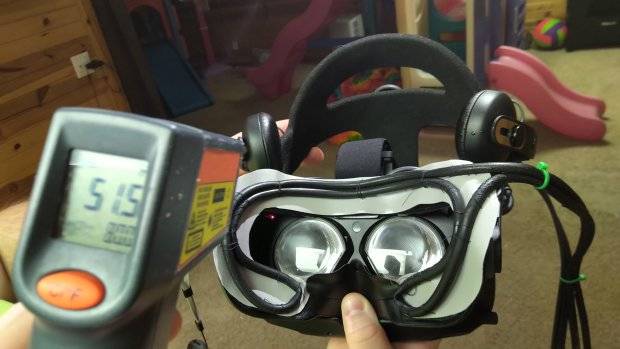 Numbers don’t lie (well, not by themselves anyway). Even after an extended play session, the surface of the tubing is a temperate 51.5º F (10.8º C) immediately after taking the headset off. The tubing temperature is so cool that I may have to rethink my insistence that it be in direct contact will my face. The new mask was comfortable enough, acting as a satisfactory substitute for the foam it replaced, but it could be improved with padding.

Over the weekend, I’ll test the system out with the now room temperature water remaining in the bucket. I’ll report the results in the comments. Maybe a closed-loop system with a radiator is in my future. I do like the simplicity of the bucket of ice water approach, though.

I was sure I’d find that someone else had beat me to the punch with this idea but was surprised when my searches failed to find an equivalent VR project. Have you seen anything like this before? Also, let me know if you like this sort of off the cuff blog-ish post on the front page or if you think it would be better to keep these kinds of projects in the forums.

39 responses to “Fish Tales: I watercooled my Vive”

I host BBQs, I tell stories, and I strive to keep folks happy.

View all posts by Colton Westrate