ryzen up the 1000 pc build
Blog,Featured

These pictures are worth a thousand dollars.

“It was still running when I parked it”

Eventually, all machines that don’t first become obsolete will break from wear and tear. The owner must then ask: is it worth investing more money into it, and are parts available? If the answer to either question is “no,” then a replacement is needed. Our new desktop PC is correspondingly the subject of today’s video feature, and includes a shiny new AMD Ryzen 5.

Strangely enough, we were not salivating over the purchase process, or checking the tracking data three times a day. We didn’t even assemble the unit until a couple days after delivery. The reason? Sometime in the past decade, desktop computing achieved Peak Refinement, somewhat in parallel to the automobiles which provide recurring analogies. New technologies and models continue to be released, and for both purchase types, it’s possible to spend a mint of money on incremental improvements. But in the past a big upgrade was tempting or even necessary within just a few years to stay current on features and performance. These days, since much of the world moves on mobile devices, PC hardware development has slowed and existing kit can have a long service life. In fact, this article’s first draft was composed on a 6yo Dell ultrabook rescued from e-waste around three years back. (Same one visible in our recent feature on Logitech mice, if you’re curious.) Other than the inevitable battery replacement, it continues to be a modern, low-maintenance machine.

But nothing lives forever, included our aging desktop PC. It was starting to fail in slow motion and we decided to build a new system before the decision was forced. We also documented the process for both your reading and viewing pleasure. If you want to dive straight into fast paced music, sped-up montages, and caffeinated jump cuts, then our YouTube feature is right for you. If you prefer the soft, pleasing effect of letters flowing across glowing virtual pages, scroll past the video for more written words. Note that none of this purchase was sponsored. We weighed all contenders, and bought retail.

Our previous desktop PC was going on nine years for its base hardware. It began life in late 2011 as a total overhaul of an earlier system, acquiring an Intel i5-2500K (Sandy Bridge) and our first-ever SSD. It was later upgraded in place to an i7-3770S (Ivy Bridge), and other incremental upgrades were applied here and there, but it finally reached the point where only another overhaul would add value. Meanwhile, family life had come into the mix and deleted most of our time and interest in A-list gaming, along with the pre-bliss toy budget. So we were content to continue working with what we had.

But, having heroically gone into its ninth year, our PC started glitching.  It began with irregular crashes. We dismissed them as coming from an aging OS installation, or perhaps from routine bugs that rise and fall in Microsoft’s “software-as-a-service” model. Next, the legacy PCI soundcard stopped working near the end of a Zoom meeting. Fiddle as we might, it didn’t come back until we physically moved it up one slot. (Yes, we had two legacy PCI slots. It was that old.) The sound was restored but other issues remained. 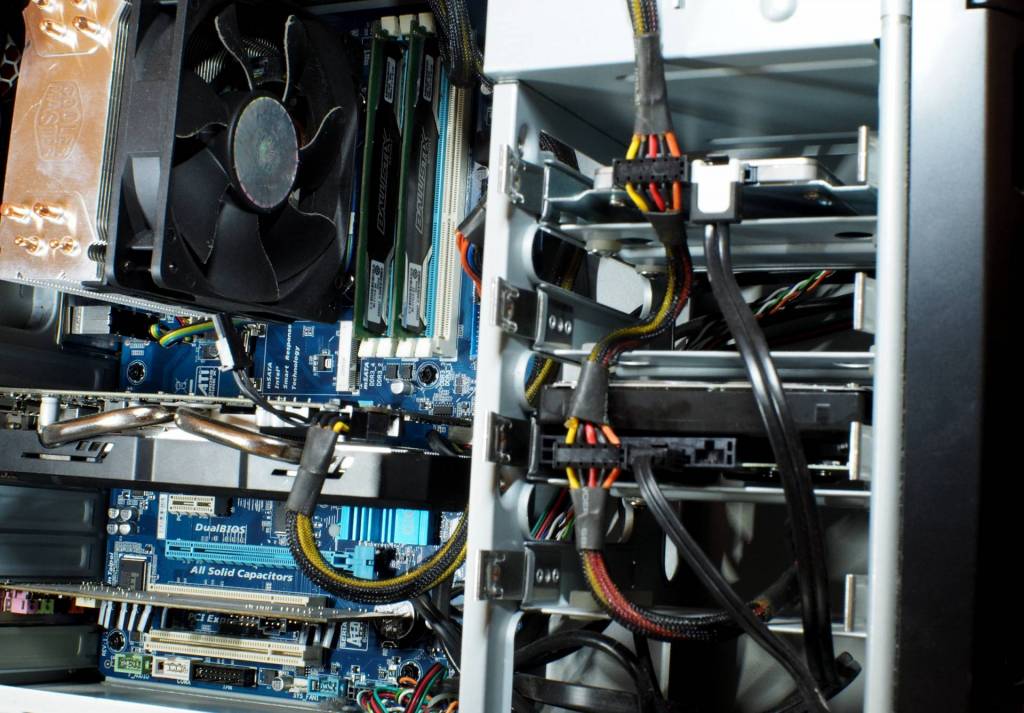 We were rationally spooked. We had been contemplating disk subsystem upgrades for several months, but now we clearly needed a new computer.

First, we had to decide what was absolutely required.  Our existing PC’s 240GB SSD was running short on space, due to a common software bug known as “iTunes for Windows.” Family members are in that ecosystem so it is unavoidable.  Our new PC would need an SSD around 500GB. Likewise, our 3TB storage drive was filling up with archived video projects, so the replacement needed to be larger. We targeted 4-8TB.

The next issue was the CPU.  Our existing 4-core, 8-thread part was serving well enough and provided a baseline for our next processor. That meant either an AMD Ryzen 5 or an Intel i5. Based on historical usage, we also knew that 16GB of RAM would be needed.

The last consideration was whether to re-use core components from our current system, such as the Antec Sonata case, the Corsair CX600 power supply, and the 3TB storage disk. Those ideas got nixed. The Sonata is a truly classic mini-tower, but the front ports are not USB 3.0, and the fixed rear cover causes grief with modern heatsink retention brackets.  The power supply would have been fine for the task but it’s usually better to start fresh in a new build. Also, the old system is probably in danger of permanent darkness if the hardware is physically disturbed, and there are software licenses tied to that machine that we don’t want to lose just yet.

The only rule for the rest was to buy trusted equipment, as it is always possible to get too cheap. An existing Blu-Ray drive switched homes with the new build, hence the bay requirement for the chassis. The 3TB drive will move over eventually, but only as a cleaned and repartitioned disk, and that needs to wait until we’re certain its contents are safely elsewhere. 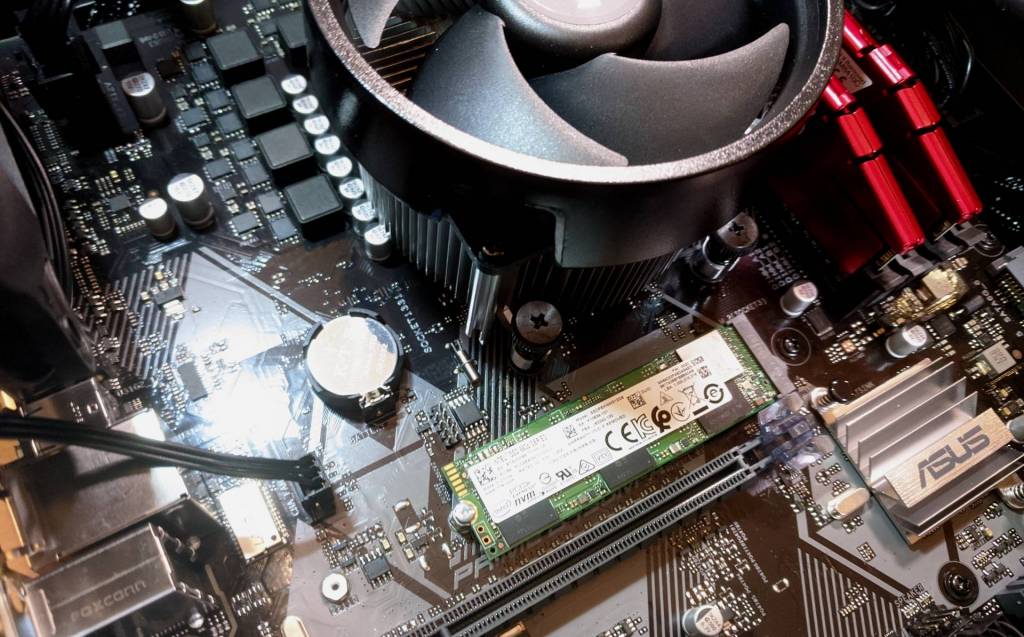 An m.2 SSD won’t reduce build costs, but it does reduce clutter.

We already had a mouse, a keyboard, and two good monitors, so our budget would be focused entirely on building the box. A quick look at funds, expectations, and online vendors led to a target of $1000 (USD). Meaning, we could definitely build a midrange system for that price, although we hadn’t decided what.  We knew our total payout might crawl over this by a few tens, but there are good reasons for developing this number early in the process:

That being said, a budget requires give and take. Not every good idea with will fit inside a price cap, which is kind of the point. So now we had to decide: Do we start with a complete OEM system and tack on a couple upgrades like a big storage hard drive? Or do we build a DIY box using either a barebones kit or an all-parts collection, and add on a Windows license?

After extensive time spent cross-comparing Dell, Newegg, Microcenter, and a few others, we found the price tag would bounce off the $1k limit pretty quick no matter how we spec’d it.  Prebuilt systems were favoring Windows 10 Home and the in place upgrade to Professional costs $99.  Also, prebuilt systems tended to blow away our price cap once we factored the unique disk upgrades we wanted. For the DIY options, Microcenter looked good since their best deals specify in-store pickup and we have a Denver location, but it’s 20 miles away and there were Coronavirus-related restrictions to consider. We finally decided to order the entire lot from Newegg, and carefully sorted out any third-party listings on Newegg’s site. There are times when third party sellers may be worthwhile, but for us, this was not one of those times.

After being hassled by our credit card provider with a charge denial for “suspicious activity,” which is probably fair given that our last online PC purchase on this scale was almost a decade ago, the checkout completed and Newegg shipped the following (prices as of May 12, 2020): 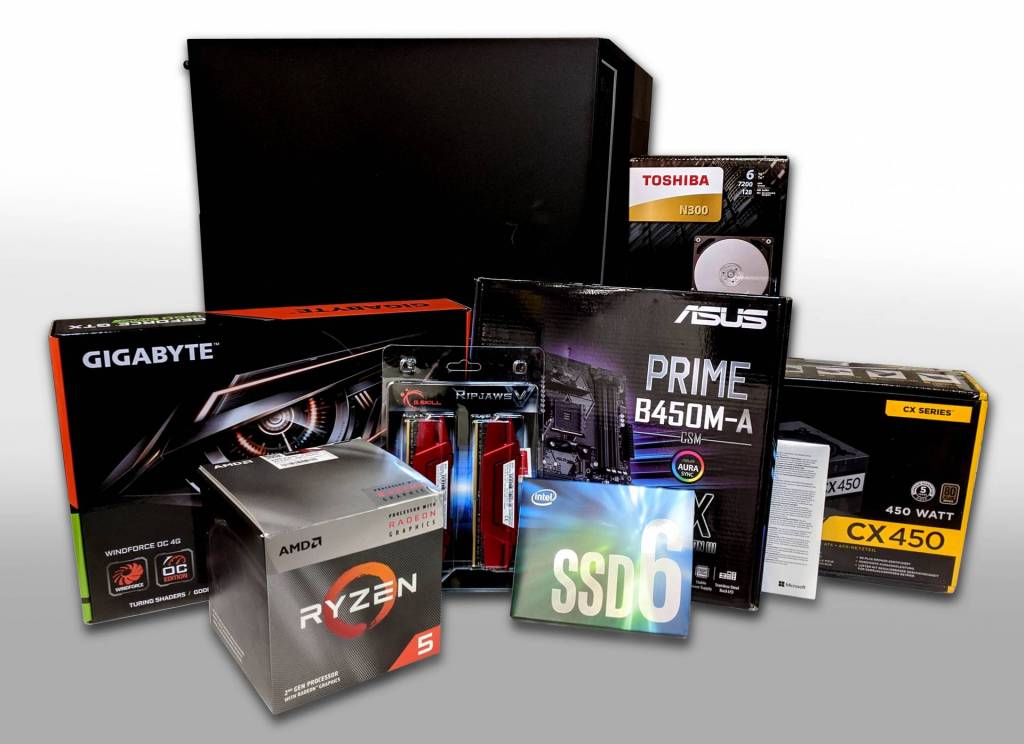 A kilobuck’s worth of hardware, centerpieced by an AMD Ryzen 5.

Total, including taxes and minor shipping adders: $1034.24.  There was an AMD-sponsored free game coupon thrown in there as well, supposedly a $29.99 value, but we haven’t looked into it yet. As a pleasant surprise, given some of Newegg’s ups and downs the past few years, nearly everything shipped within a day and arrived in a timely fashion. The only serious difficulty we experienced was trying to decode the name of that Gigabyte graphics card.

What did we learn?

Surprisingly, the breakout star of this build turned out to be the Antec P7 Silent. It is arguably the best mid-tower case we’ve ever owned in the lower-cost bracket. (For us, that means less than about $70.) There are signs of being built to a price in the thickness and quality of the materials, but the appearance makes the best possible show while the overall features are better than the price would suggest. To give one example, it has two USB 3.0 front ports. Several others in this price range commonly have one USB 3.0, and downgrade the second port to 2.0. Another plus is the use of a soft white indicator light around the power button, which doesn’t cast knives of sharp blue light across the room.  Those are fine for Jedi knights, but not at all appropriate in most consumer appliances.

Meanwhile, the biggest point of contention among our readers is probably the AMD CPU — why did we order a part with graphics on board when we have a dedicated GPU?  Again, it was a budget decision. At the time of order, six-core Ryzen CPUs from the latest product lineup were noticeably more expensive than the four-core unit we purchased. Unsurprisingly, that changed in the month it took to research, buy, and build the system, and then report our findings. Such is life when acquiring consumer goods that rapidly depreciate. The system we did build is working great for our needs, so there’s no point playing the what-if game. 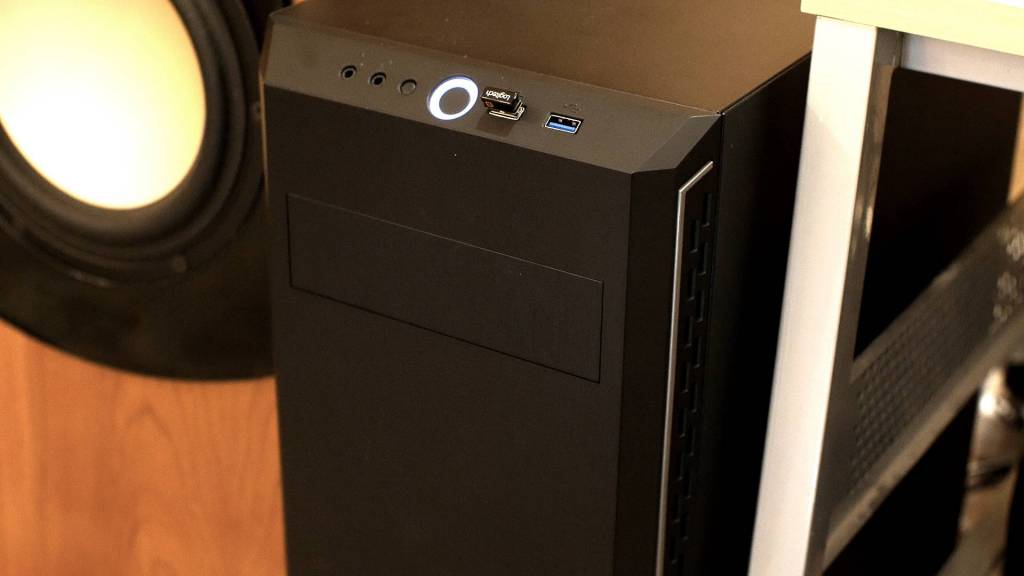 The Antec P7 was like finding a Banks suit, tailored to our size, at a thrift store.

Finally, it’s worth noting that the Toshiba N300 storage drive we used, while pricier than some competing options, does NOT use SMR (shingled magnetic recording). Without diving into the details of what that means, suffice to say it increases capacity but can have performance implications in some use cases. Check out the recent Ars Technica review of the WD-Red in a NAS application if you want a deeper dive. For now, we would just rather avoid it. And we have good past experiences with Toshiba drives, which is kind of important when storing all your eggs in one stack of platters.

That’s where we’ll wrap up for now. For further discussion of the hardware and how it worked out for us, check out our YouTube video feature, linked above.  It’s got 10% more dry humor than this article and a build summary with helpful tips and tricks. If that still doesn’t satisfy your needs, then maybe it’s time for a fresh build or an upgrade of your own system. Hopefully, we’ve now given you a few fresh ideas to kick around!

View all posts by Aaron Vienot