Every commercial you’ve seen and email you’ve received from a company in the past week reminds you that right now, we live in unprecedented times. It’s true, for sure. For many, that means working from home and pulling back from socializing. You can binge Netflix until the cows come home, but sitting still gets old. Microsoft’s Xbox Game Pass for PC, then, presents a unique opportunity. For just $5 a month, you can check out nearly 200 PC games. When free time is plentiful but money might not be, that’s an appealing price.

We’ve put together a list of some games that have tons of gameplay to offer across as many different categories as we could. These games will devour hours into the double and sometimes triple digits for the right gamer or the right group of gamers.

There are so many zombie games out there, from Zombie Army 4 to World War Z to the glut of Resident Evil games. State of Decay 2 stands apart from these with unique gameplay and a novel take on the post-apocalypse. In State of Decay, you’re not an action hero or a loner. Instead, your job is to help put together a community of survivors in a world overrun by zombies. You can control any character at any time, taking on tasks like helping other survivors, taking down zombie nests, and searching for supplies. You have to upgrade your base, manage resources, and take care of your people. 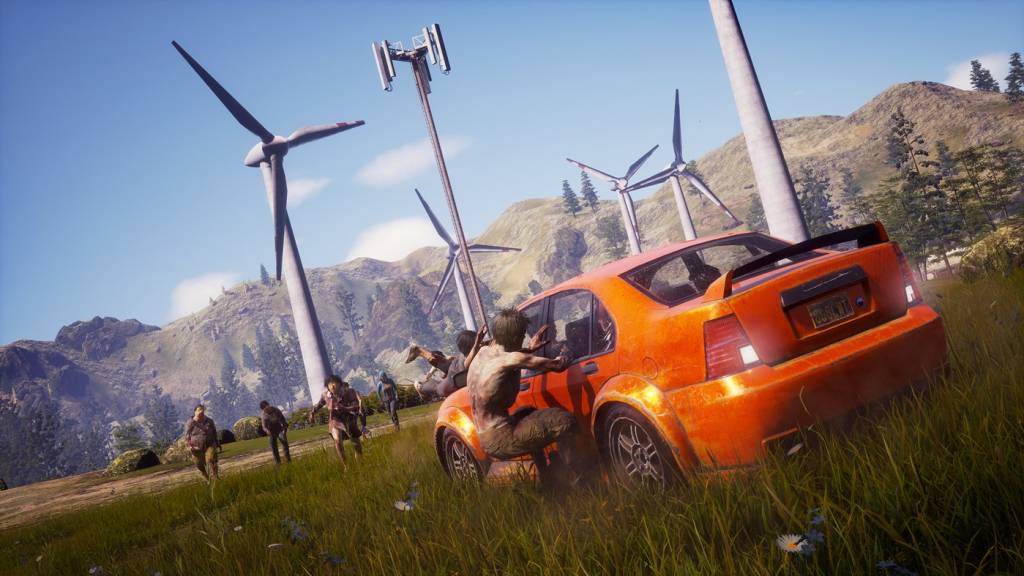 If this sounds stressful, it certainly can be in its own way. Characters can permanently die, and seeing someone you’ve spent a lot of time leveling get ripped in half by a huge zombie is heart-wrenching. And yet when I get into the groove with this game, it’s weirdly relaxing to roll around looking for supplies and clearing out empty houses. It’s a version of the zombie apocalypse that focuses on hope, building, and community, and it feels good to have a little control.

Beware: this game is a little janky, and it’s not the prettiest game out there. But it’s charming, entertaining, and has tons to do. The Juggernaut edition has just hit PC, too, and that adds a new map and more, making it worth checking out even if you’ve already played it.

Playtime: 17 hours for the base story, upwards of 75 for completionists (via HowLongToBeat).

The Yakuza series has been around for nearly two decades, and it can be hard to know where to start. Well, there’s no better place to start than Yakuza 0. Set in the fictional Kamurocho and Sotenbori districts of Tokyo and Osaka, Yakuza 0 takes the series’ iconic characters and rewinds back to before they were grizzled gangsters. Kazuma Kiryu is a gangster just getting his start, while Majima Goro is a club owner who has his sanity and both of his eyes. 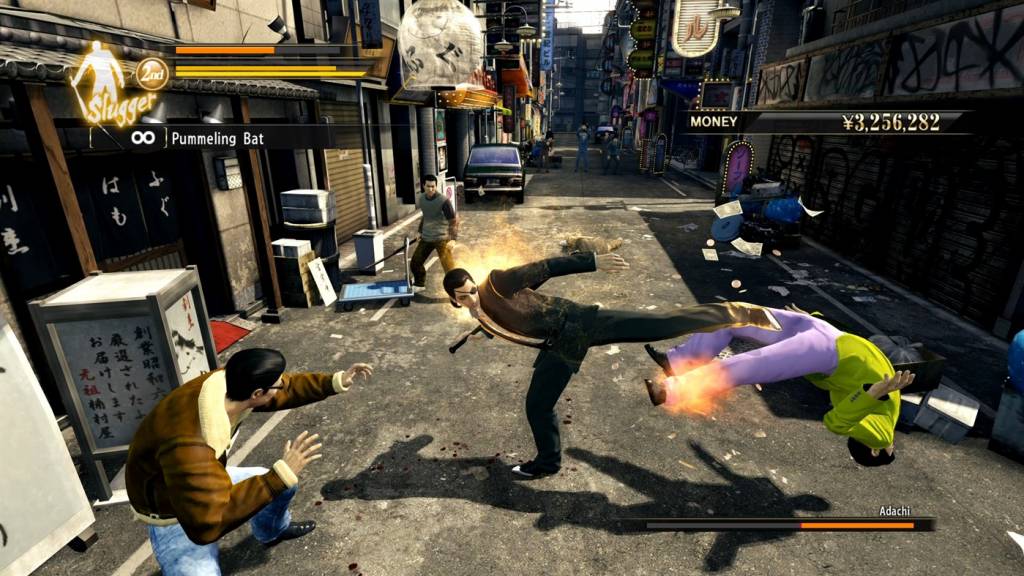 This is in many ways a traditional Japanese roleplaying game, but it’s also tourism and time travel. The settings are close relatives of their real-world siblings (I was able to navigate the streets of the real Kabukicho pretty easily thanks to my years with this series), and the 1988 setting shows off the wild times of the Japanese economic bubble.

Yakuza 0 offers dozens of hours of gameplay that include getting into brawls, running a real state company, running a hostess club, trying every food and snack, and getting wrapped up in all sorts of side quests. Yakuza 0 is one of the best looking and most entertaining games in the series and is a great place to dive in. Better yet, Yakuza 1 Kiwami and Yakuza 2 Kiwami are out on PC as well and are scheduled to hit Game Pass some time in the not-too-distant future.

Playtime: 30 hours for the main story, 130-plus for total completion (via HowLongToBeat). 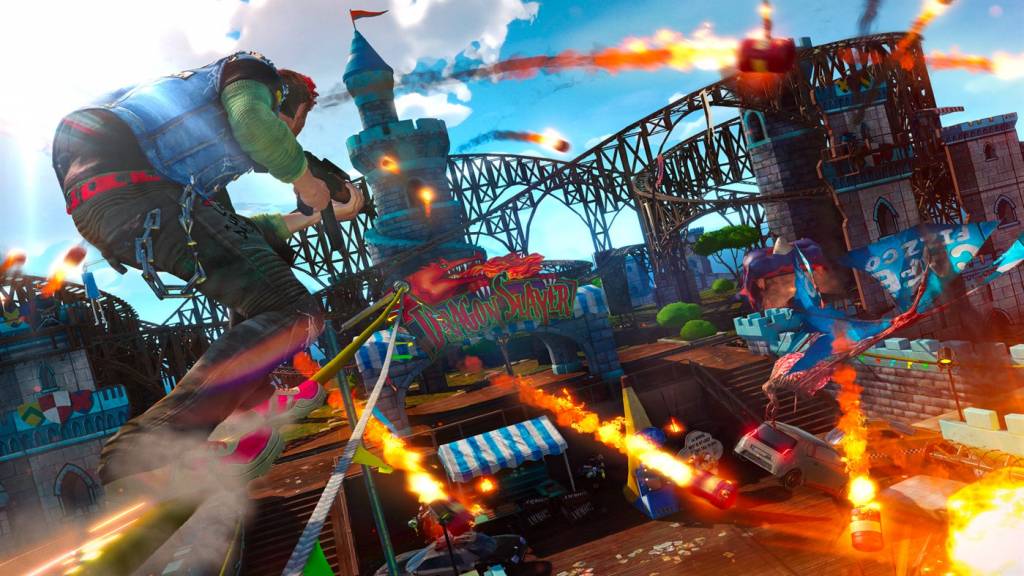 Sunset Overdrive gives us a very different take on the apocalypse from that of State of Decay 2. From the same team that brought us the PlayStation 4-exclusive Spider-Man, this open-world action game is set in Sunset City, where the product unveil of a new energy drink went wrong. So wrong that the people who drank it turned into mutants. You can save the city with cobbled-together weapons and acrobatic movement. It’s kind of a punk-rock reimagining of the apocalypse, full of color and killer music. As an open-world game, there’s tons of exploration, leveling, and sidequests to go through before the game will run out of steam.

Playtime 10 hours for the main story, upwards of 35 for completion (via HowLongToBeat). 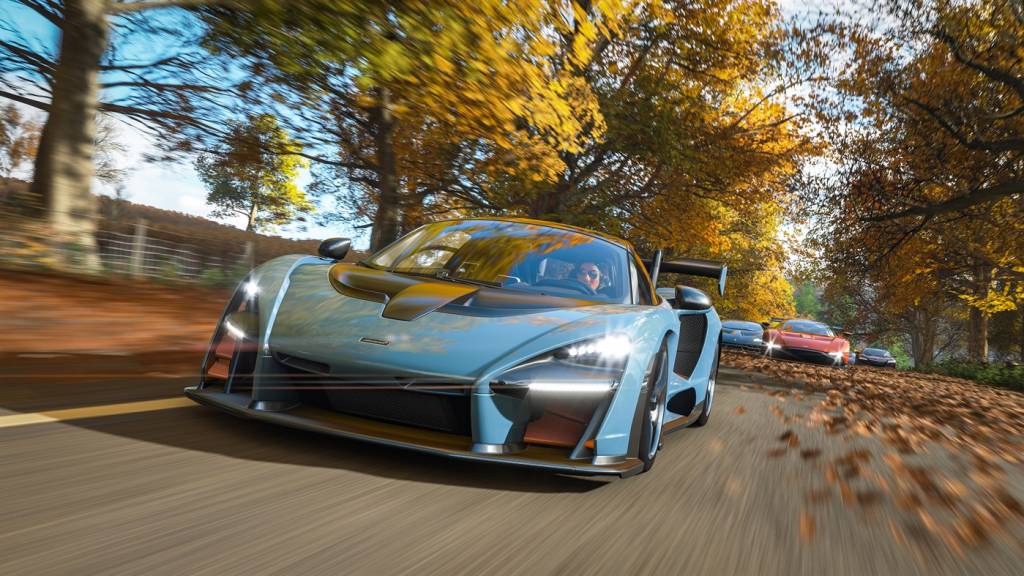 Sticking to the open world, also available on Game Pass is Forza Horizon 4. If you haven’t had the pleasure, Forza Horizon is a big departure from its Motorsport brethren. If Forza Motorsport is the reality of racing a car, then Forza Horizon is the fantasy. You can take a Lamborghini for a drive on the sandy beaches of England or race a Mini Cooper through Edinborough. If you get the LEGO Speed Champions DLC, you can visit a gorgeous LEGO-themed world, too. The base game is on Xbox Game Pass for PC and offers hundreds of cars and roads to drive them on.

Playtime: 11 hours for the main story, 80 Plus hours for completion (via HowLongToBeat). 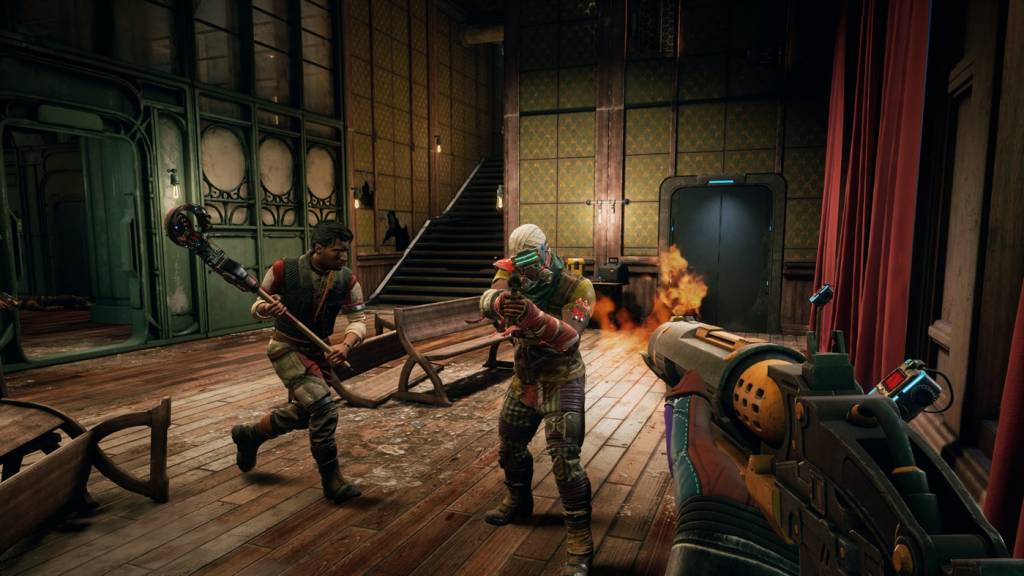 If you prefer to explore the world looking down the barrel of a gun, The Outer Worlds is worth a look. This RPG comes from the team who brought you Fallout: New Vegas and Pillars of Eternity (also on Game Pass!), Obsidian. The Outer Worlds puts you in the shoes of a colonist awoken from decades of cryosleep. You find a world overrun by capitalism taken to macabre extremes. As a game in the vein of the Fallout series, you get to choose whether to save it from itself or to make the best of a bad time for you and you only.

It’s not as big as a Fallout game, but it offers a variety of worlds to explore, people to meet, and weapons to check out. This is the shortest game on here yet, coming in under 30 hours to complete almost all sidequests and the main quest, but it’s still worth a look if you’re craving an RPG.

Playtime: 12 hours for the main story, 25-35 hours for completion (via HowLongToBeat). 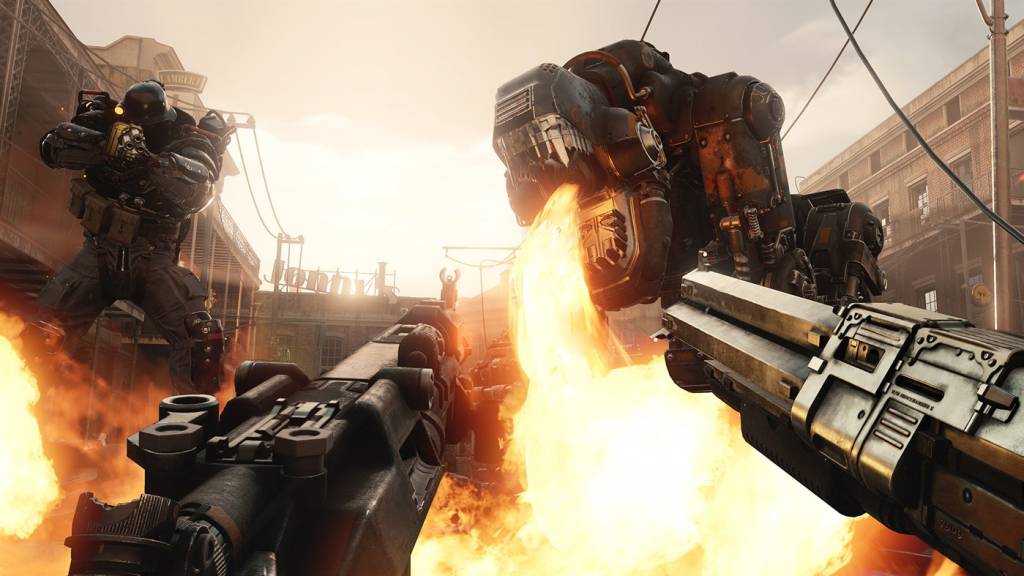 Meanwhile, Wolfenstein II: The New Colossus offers a grittier world. After BJ dealt a major blow to the Nazi war machine in Wolfenstein: The New Order, one man cannot take down a whole regime alone. The New Colossus picks up where that one left off: what’s next? You’ll continue to resist Nazi rule while picking up all manner of powerful guns and plowing through Nazis with Machinegames trademark twitch-shooter gameplay and stunning visuals.

Playtime: 10 hours for the main story, 30 hours for completion (via HowLongToBeat). 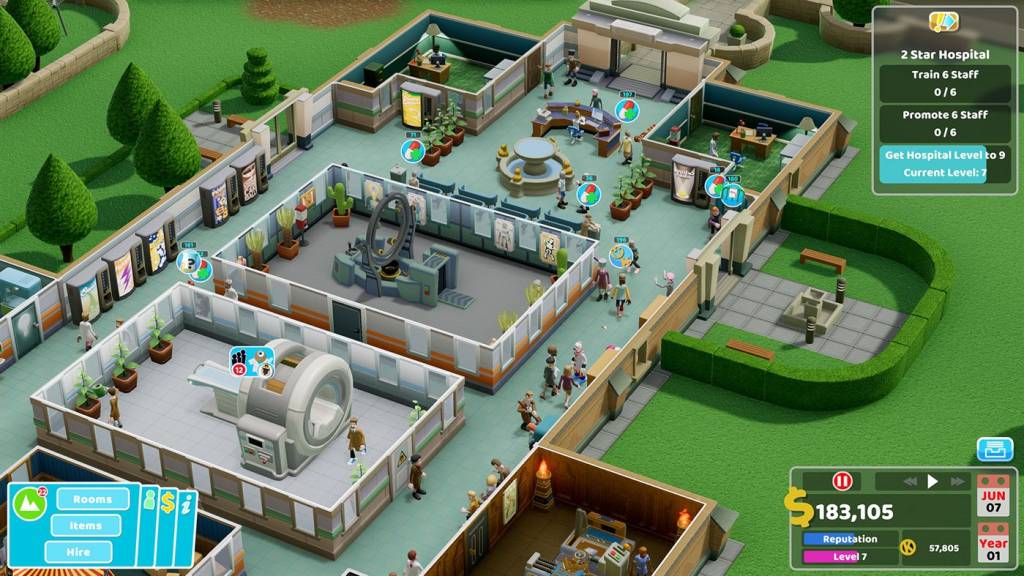 If you’d rather heal than hurt, Two Point Hospital is worth a look. Imagine Hospital Tycoon but with a Wallace and Gromit-themed coat of paint. This game is cute and full of humor but has plenty of depth to manage the ins and outs of a hospital, from employee training to patient happiness and technology research. The game runs you through different challenges as you open up different types of departments and gizmos while you cure all manner of silly diseases.

Playtime: 30 hours for the main game, 150-plus for total completion (via HowLongToBeat). 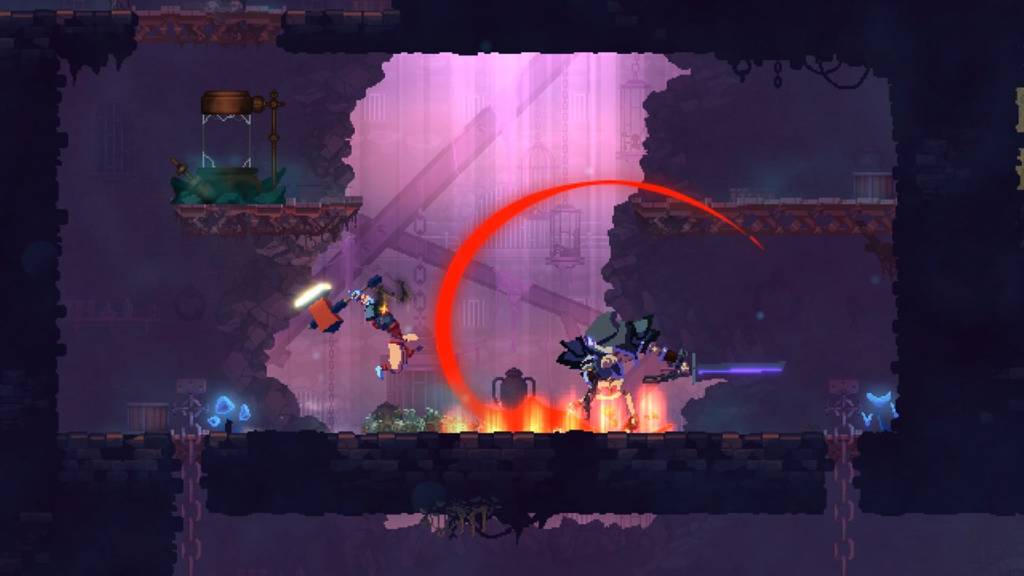 Playtime: 13 hours for the main story, 75 for completion (via HowLongToBeat). 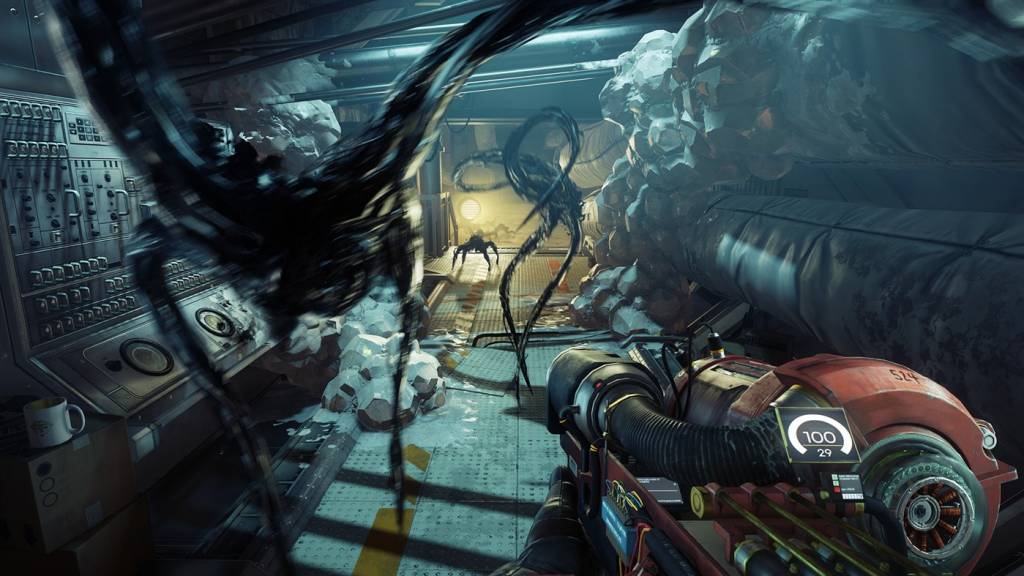 Prey, meanwhile, will take you to a space station orbiting high above the earth and under siege by a race of aliens called the Typhon. This is an immersive sim in the vein of Deus Ex and System Shock, so you can explore a world populated with objects you can pick up and read, stack, use and, with the right alien power, maybe even mimic. The game offers a deep science fiction story with plenty of twists and turns and an intricate world full of traps and enemies to solve your way around. The game struggled to find an audience when it hit back in 2017, but it’s another great game from the same studio that created Dishonored and Dishonored 2, Arkane Studios.

Playtime: 16 hours for the main story, 43 for completion (via HowLongToBeat). 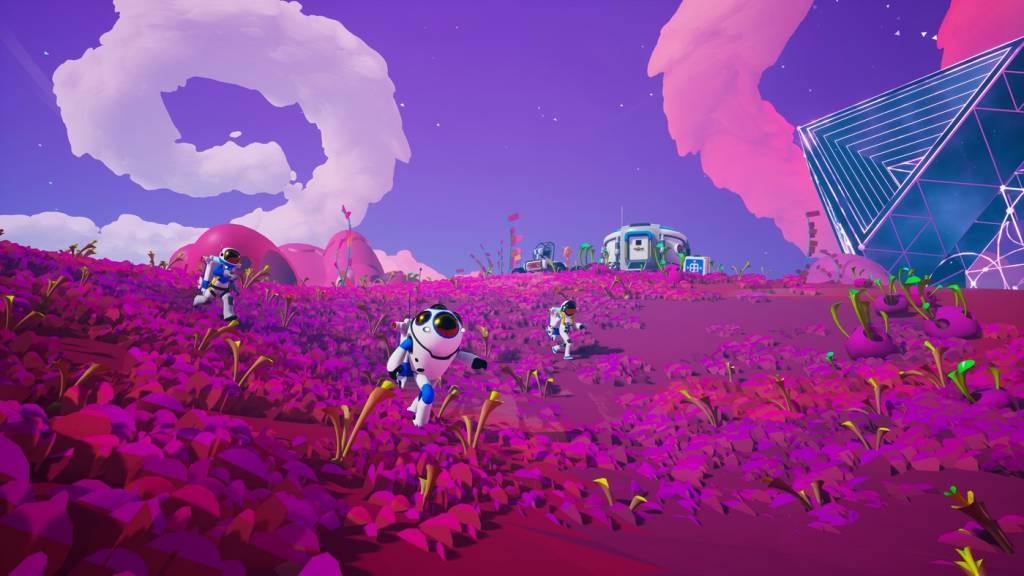 Astroneer puts the story in your hands. This game is more in the style of Minecraft than anything else on this list, but it has its own style. You’re a space explorer who must colonize and gather resources on a variety of planets. There’s no story, but there are plenty of goals. The game offers multiplayer and its physics make for entertaining, emergent multiplayer gameplay.

Playtime: 19 hours for the main goals, or as long as you can make fun in it (via HowLongToBeat).

Lastly is Rare’s return to its formula of simple but deep gameplay and iconic art after years as Microsoft’s Kinect studio. I’ve personally put hundreds of hours into Sea of Thieves across PC and Xbox both with friends and alone. Since its rather anemic launch two years ago, Sea of Thieves has seen massive expansion. Since then, Rare has introduced a new section of the map, new boat types, new cannonballs, NPC ships, and story events called Tall Tales. 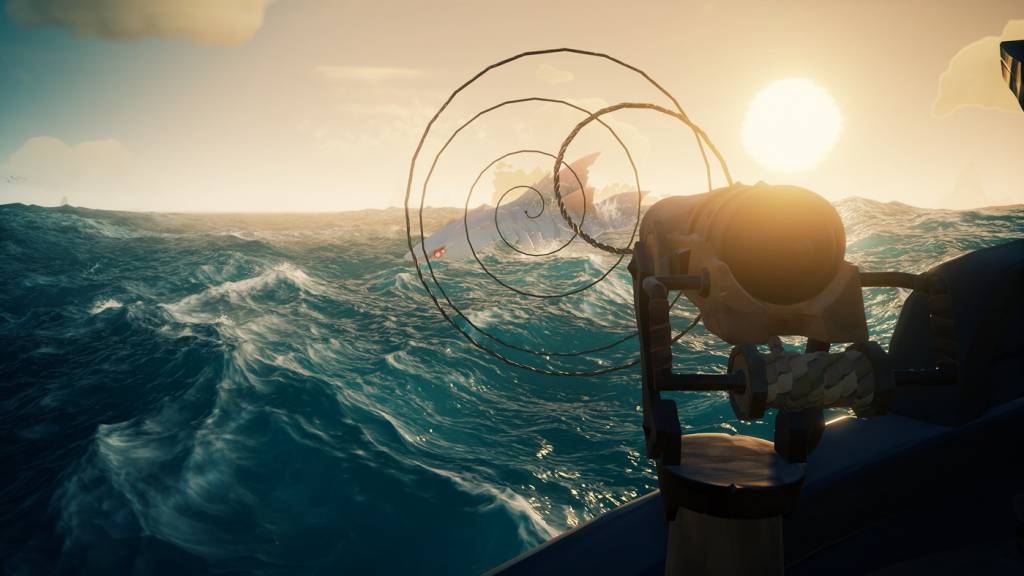 Whether you’re just sailing in search of treasure, running through a story voyage, or looking to make trouble, Sea of Thieves offers deep, satisfying gameplay. Sailing requires that you manage your sails and direction while taking wind into account. Hunting for treasure will test your ability to read a map. Tall Tales are filled with puzzles and traps. Throughout are beautiful unique sites littered across dozens of islands. I’ve sailed well over 2000 in-game kilometers across hundreds of voyages and can’t see myself stopping soon thanks to the consistent trickle of new story content and new game mechanics.

Sea of Thieves is at its very best with a crew of up to 3 of your friends and offers crossplay between Xbox and PC. The multiplayer is cutthroat, but the cartoony art is beautiful and family-friendly, making it a great choice to play with some younger gamers looking for a challenge.

And that’s just the start

There are strategy games like Age of Empires I & II Definitive Edition, role-playing games like Torment: Tides of Numenera, Halo: The Master Chief Collection, FTL, horror games, shooters, indie games, platformers like Ori and the Will of the Wisps, and more. Gaming can be an expensive hobby, but Xbox Game Pass for PC is a nice way to bring that price way down.

3 Tech Hardware Trends to Watch Out For Right Now

These Charities Are Helping Ukraine

What is Nvidia RTX IO? Guide and Reveal

The Most Popular Wearable Medical Tech

Fight out (FGHT) has already taken the international move-to-earn crypto sector by storm as it has raised nearly $4 million in its presale. As investors all over the world are...

Twitter has had a rough few months ever since being purchased by Elon Musk for $43 billion. Just last week, Twitter stated it would be shutting down free access to...