Since earlier this month, I think, Google Search (on desktop) has turned ugly and primitive when running with JavaScript disabled.
It happens in .com, but not some other TLDs. Anyone else noticed?

I hope it's another A/B test of theirs and not a permanent change.

The ugly border-per-item look is surprising; it's sort of a throwback to messy 90s designs, and doesn't fit the current flat-and-empty trend. 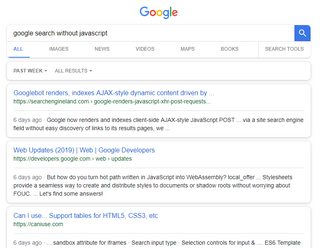 I'm not a fan of the flat style trend, actually - I like the look in the screenshot you've posted.

Running with JavaScript disabled breaks many sites (not just Google). You're tilting at windmills; just give in and use JavaScript, or stop using the web.
Nostalgia isn't what it used to be.
Top

Do yous get that design as well with JS off?

The looks is just part of the problem. It's also missing pieces of info and features that existed before in the JS-less format, and it's less compact.

I'm not a fan of the flat-n-empty style either. Classical search result pages aren't exactly flat-n-empty, they just tended to be flat, which worked well for pages that are packed with multiple detailed textual items. It's less busy without dividers, and easier to read somehow with bold titles acting as item "anchors".

Nothing wrong with disabling JS where it's not needed. Faster page load, faster page navigation, less anti-features, less visual junk. I'm mostly on a browser where it can be toggled dynamically without page reload, so it's easy.
Top

Doctor, it hurts when I do this!

Don't do that.
Do not meddle in the affairs of archers, for they are subtle and you won't hear them coming.
Top

It also hurts when I don't.

I just wonder how localized or global Google's design testing is.
Top

That means your finger is broken.

Javascript is terrible. I guess there must be some people that like it, but I don't know who they are. However, the fact that things got "broken" when you turned javascript off isn't a failure in testing. Nobody is going to waste their time testing with javascript turned off, and nobody is going to waste their time fixing things that got "broken" because of turning it off.
Last edited by Redocbew on Mon May 27, 2019 1:10 pm, edited 1 time in total.
Do not meddle in the affairs of archers, for they are subtle and you won't hear them coming.
Top

I can see why you're asking this question - trust me, there will always be someone stating "don't do this" rather than answering the question

I see what you mean, this new look it is a bit fugly imho: 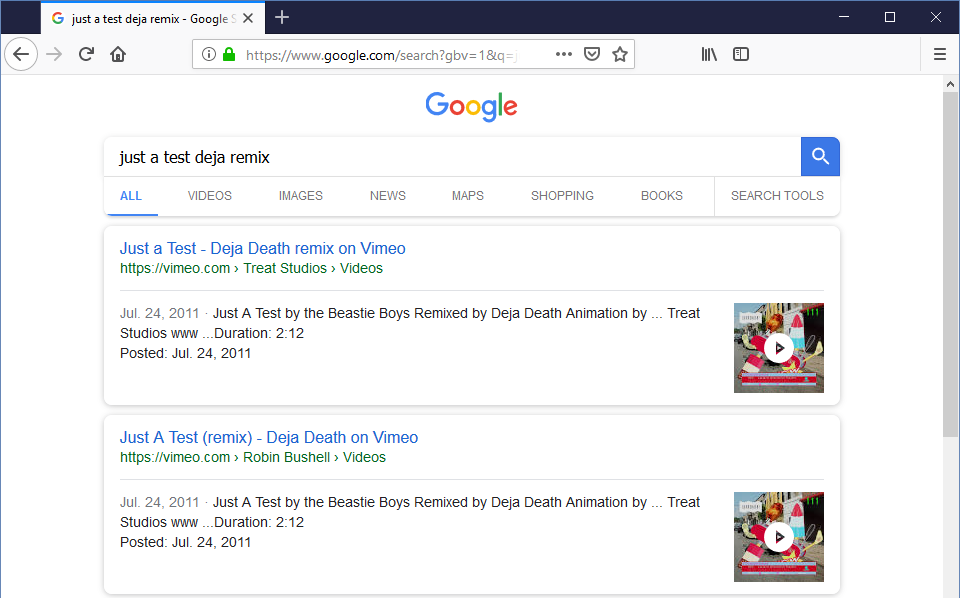 qmacpoint wrote:
I can see why you're asking this question - trust me, there will always be someone stating "don't do this" rather than answering the question

Thanks. I think more Google TLDs got infected in the last few days. Still hoping it's temporary, though seems less likely now.

Redocbew wrote:
Javascript is terrible. I guess there must be some people that like it, but I don't know who they are.

I think JS is inherently good, but with great power comes great responsibility

, and sadly it's commonly misused. Taking the ailments of modern desktop software and reimplementing them on the web.

Oh, that's not what I meant about testing. Google sometimes serves different designs to different people/regions/times, presumably to test... something. Maybe which gets people clicking on to their target quicker, or I don't know what. This design change appeared initially like it might be one of those tests. I could get the old design back by deleting cookies, for example.
Top

, and sadly it's commonly misused. Taking the ailments of modern desktop software and reimplementing them on the web.

Yeah, there is that. A while ago I had to fix a few existing services that were written in Node.js with a frontend to go along with it. The frontend was compiled using a Node.js module called Browserify that translated the code back into "normal" client side javascript so it could run in the browser. It occurred to me about half way though that I was using a client side language(which had already been poked, prodded, and abused a great deal) extended into acting like a server side language which then got transformed again back into(the same!) client side language. The result was 100-ish lines of code that exploded into a 2MB .js file. Small wonder there hadn't been any trouble before it landed on my desk.

What I mean though is that javascript is still terrible even if you ignore shenanigans such as that. It's inconsistent. It's sort of object oriented, but not really. It's untyped, but not really, and there's things like promise objects tucked away inside it which are a general WTF to just about everyone who first encounters them.

I could get the old design back by deleting cookies, for example.

Yeah, maybe you just got lucky there. It's hard to say. If so, then I doubt whatever they were testing had to do with disabling javascript. That was probably just an added bonus.

Do not meddle in the affairs of archers, for they are subtle and you won't hear them coming.
Top

Javascript is powerful for sure but I find it fairly yucky, I read the 'You don't know JS' series in an attempt to get past the yuckyness of it, to try and 'see the light'. But really as above, I find it to be cludgey and inconsistent. It has odd aspects that the aforementioned series tries to explain in order to put you in control, but other better languages are simply more intuitive out of the box without the added hassle.

I like JS as a language. Not for writing an OS, but for scripting-level stuff. Nice terse and clean syntax, and the non-strictness is useful for smaller things.
To make it less loose one can use higher-level constructs, strict mode, TypeScript... There are also some extra features in newer revisions of the language.
Top
Post Reply

Users browsing this forum: No registered users and 4 guests
GZIP: On
×