I got one of these about a month ago and thought I'd share some impressions. I am too lazy to do the whole uploading pics thing right now, so that will have to come some other time. For now, I present rather messy-looking benchmark results showing the memory hierarchy. The CPU in this NUC is a N2930 (quad core, 2.16 GHz burst, 2 MB cache), and there is a single 8GB DDR3 SODIMM installed. I am running Mint 17, and the disk drive is an old Intel G2. 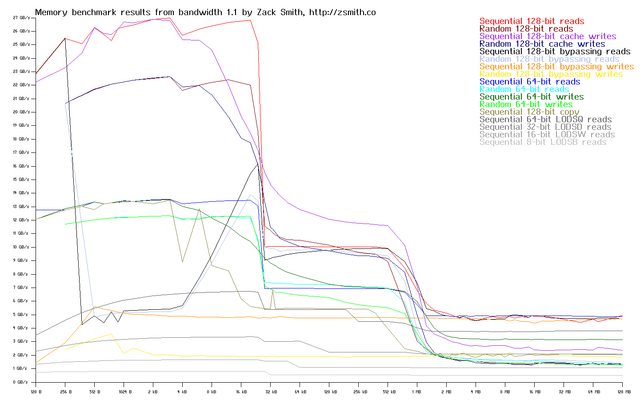 I am not sure what the cache hierarchy looks like, but the results are consistent with a half meg of L2 per core, and maybe 24 kB of L1 data.

I also ran some Phoronix Test Suite benchmarks on both this platform and the DN2820 NUC, which is a dual core with slightly higher clocks. As you might expect, the N2820 is faster in single-threaded tasks, and slower in multithreaded. Unfortunately I lost my numbers when I upgraded to Mint 17, but I will try to make new ones. Subjectively, the quad-core is more creamily smooth (smoothly creamy?) than the dual core. Compared to my desktop machine, web-browsing is fairly smooth if occasionally less responsive.

The CI320 is fanless, so it is very quiet. I pick up a bit of a high-pitched whine, but it is negligible. Since it is fanless, it does get hot. Idle die temp seems to hover in the high 60s (C) at a room temp of roughly 70 F. Under load, it reaches the 80s, but interestingly there is a long time constant for changes in temperature. The temps make me a little nervous, but I suppose that is the price one pays to go fanless.

Linux is not officially supported but the most important things seem to work out the box (network, wireless, audio). The SD card reader doesn't work, and the eSATA port doesn't seem to either. Bluetooth also appears to be absent. Overall though I haven't had too much trouble.

Users browsing this forum: No registered users and 5 guests
GZIP: On
×