More than almost any other computer hardware product, monitor specifications are frequently a load of smoke and mirrors. That’s not to say that the numbers aren’t meaningful—it’s just that you really have to know what you’re looking at. These thoughts occurred to me while looking at LG’s latest UltraGear gaming monitors, which just might be the real deal. The 27″ 27GL850 and 38″ 38GL950G are LG’s next gaming monitors to use the company’s “Nano IPS” technology, and the South Korean company puts these two monitors down for a 1-ms GTG response time. 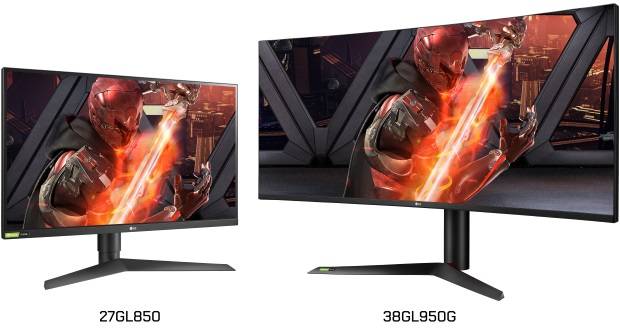 We first heard about Nano IPS from LG shortly before CES. Then, the company was launching three displays based on the technology with impressive color gamuts. Indeed, the primary benefit of Nano IPS construction is that displays so-built can display a wider range of colors with improved saturation compared to previous-generation IPS displays. The technology is kin to Samsung’s quantum dot-based “QDLED” displays; TFTCentral says that its measurements of the two technologies have produced “very similar” results.

Most gaming monitors rated for 1 ms response time are built around TN LCDs, while displays using IPS or VA LCDs usually get rated for 2-4 ms. In theory, Nano IPS construction doesn’t offer any particular benefit to response time. Nevertheless, since there’s no mention of blur reduction or the quickly-becoming-infamous “MPRT” measurement, it seems LG is stating that these displays can, in fact, simply shift shades faster than other IPS monitors.

Besides eye-searing brightness, the 38″ model includes LG’s “Sphere Lighting 2.0” bias lighting feature. RGB LEDs on the back of the display project colors onto your back wall that are derived from what’s going on on-screen. I haven’t gotten to experience anything like that myself yet, but those who have say it really improves immersion. Furthermore, the UltraGear 38GL950G has G-Sync support, while the 27GL850 has to make do with being “G-Sync Compatible”—or FreeSync, as we used to say.

LG says both models will be available in the US next month, with pre-orders on the 27” 27GL850 starting on July 1. European markets will have to wait until the third quarter of this year. The company isn’t talking prices yet.