Asus is readying a new monitor in its [amazon_textlink asin=’B07WQ4FXY9′ text=’TUF’ template=’ProductLink’ store=’techreport09-20′ marketplace=’US’ link_id=’52040fcb-fc1e-4ca0-b68c-d1bb40ff62e4′] line, according to a Taobao listing discovered by TFTCentral. The Asus TUF VG279QM has an enticing laundry list of features that should make it a must-buy for quite a few gamers. Among them, a high-refresh IPS display.

The Asus TUF VG279QM is a 27-inch display with a 1-ms-response IPS panel and offers a refresh rate going up to 280 Hz. The caveats to what already a cool set of stats is that this is a 1920 x 1080-resolution display in a time when 1440p has become the sweet spot for many gamers. The 280 Hz refresh rate, TFTCentral says, is likely the result of overclocking, as it climbs beyond the 240-Hz limit of existing IPS panels.

The screen is Variable Refresh Rate-compatible, though, and Asus is advertising compatibility with both generic VRR solutions and with Nvidia’s G-Sync solution. Nvidia’s ELMB-Sync (Extreme Low Motion Blur) technology will also allow both VRR and blur reduction to run at the same time. 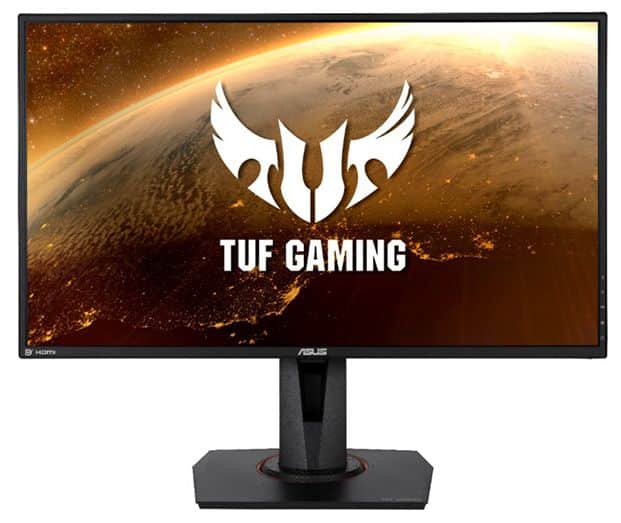 And while the screen advertises HDR, it’s DisplayHDR 400, meaning that the screen only gets to 400 nits of brightness at the top end.

The screen offers 178-degree viewing angles in both horizontal and vertical directions, and a 1000:1 contrast ratio, too.

On the back of the screen, you’ll find a single DisplayPort 1.2 pot and 2 HDMI 2.0 connectors. You’ll need that DisplayPort jack if you’re going to run this thing at 280Hz. The stand offers tilt, height, and swivel settings, and the panel itself is VESA-mountable. Oh, and there is, of course, and Aura Sync RGB lighting option.

The Asus TUF VG279QM is going for the equivalent of about $530 dollars over on Taobao. Asus has not yet announced western availability or pricing for the screen just yet. Despite the lower resolution, the display puts together a pretty impressive feature set. The IPS panel and high refresh rate are the stars here and will be the reason it costs as much as it does. IPS panels provide better color accuracy and contrast but aren’t typically as fast as TN panels. VA panels sit somewhere in the middle.

We’ll know whether the TUF VG279QM is one to pick up once it gets some kind of pricing.