CPUs and GPUs put out a lot of heat. Hence the fact that most of our video cards have 2-3 fans on them or that liquid-cooled setups are even a thing. Passive cooling is difficult to do and can take up a lot of space. But you can do it, as Palit has proven again with its new GeForce GTX 1660 KalmX card.

The Palit GeForce GTX 1650 KalmX–that’s a mouthful–is a passively-cooled variant of the GTX 1650. It uses a custom PCB with a double-width heatsink attached. The heatsink has two nickel-plated heat pipes. The full card, heatsink included, measures 178-mm long and 135-mm tall. Compared to other GTX 1650 cards, that’s a bit shorter than many but notably taller. 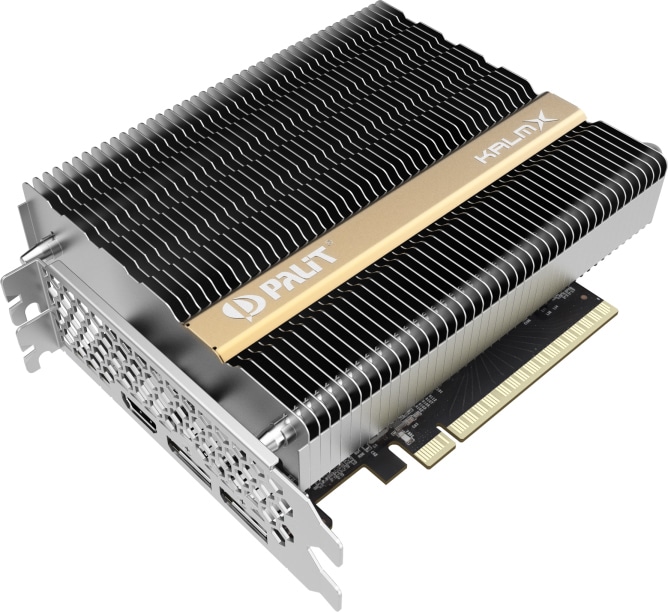 If you’re picking up the Palit GTX 1650 KalmX, chances are you’re doing so specifically because it’s dead silent, so you won’t be surprised to hear it makes some concessions. The card’s 75W TDP matches Nvidia’s reference card, as do the base and boost clock speeds of 1,485 MHz and 1,665 MHz. It’s not going to win any drag races (or beauty contests), but that’s not the point of the card.

Also noteworthy is the fact that the GTX 1650 KalmX does not require an external power source. Your motherboard will supply enough power to run the card, so there’s no power connector onboard.

The card has pretty simple outputs on the back, with one HDMI 2.0b port and two each of DisplayPort 1.4a ports.