Three years ago, we reported that a new Atari console was on the way, sporting a custom AMD processor and bearing the name Ataribox. A year later, the name was changed to Atari VCS, matching the console’s name with its visual design, which is a call back to the classic Atari VCS 2600. Atari now plans to release two different systems, the Atari VCS 800 and 400.

The 800 is slated to be the more powerful of the two systems, packing 8GB of DDR4 RAM and supporting 4K video, as opposed to only 4GB and 1080p video. However, it’s unclear what other differences, if any, there will be between the two systems. Both systems are listed as having AMD Raven Ridge 2 APUs with Ryzen graphics. The VCS 800 is further specified to have a new Ryzen multi-threaded Zen processor with Radeon Vega 3 Graphics. No further details are available concerning the VCS 400, but given that the maximum supported video quality is 1080p, it’ll likely ship with a lower power processor than that in the VCS 800. 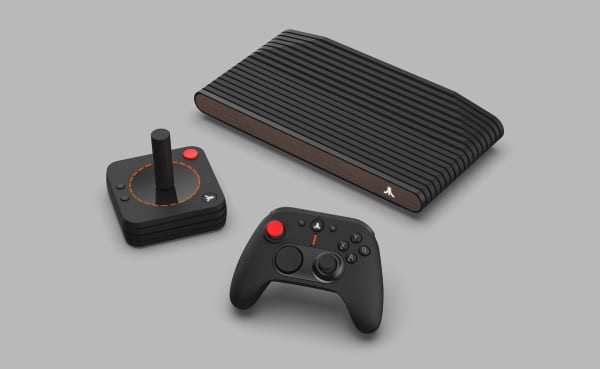 Both systems will come with 32 GB of internal eMMC storage, which can be increased with the addition of an external USB drive or a subscription to cloud service, likely Atari’s version of Antstream Arcade. The ability to use external USB drives is central to Atari’s marketing the VCS systems as PC/Console hybrids. In console mode, the systems will run a custom Linux-based OS called Atari World. However, you can switch to PC Mode, boot off an external USB drive with your operating system of choice, and hook up a keyboard and mouse, resulting in capable a multimedia PC.

Atari has opened up pre-orders for the VCS 800, promising to deliver the systems ordered in July by December 24th. The All-in Bundle includes the system itself, as well as a wireless modern controller and wireless classic joystick. The bundle will run you $390, if pre-ordered from Atari or Walmart, but you can get it for $10 cheaper from GameStop. However, the retailer from which you order will determine the color of the trim on the front and back of the system, with Black Walnut, Onyx, and Carbon Gold being the three options. The Black Walnut edition, as seen above, comes with the All-In Bundle available on Atari’s website, but you can also order the Onyx version separately on Atari’s website for $280. Both the controller and joystick are sold separately for $60 each.

Regardless of how you buy the VCS 800, it’ll come with 100 classic Atari console and arcade games, with more available for purchase in the Atari VCS store.