I’ve reviewed Roccat’s Sova and Corsair’s Lapdog, which are both lapboards targeted at PC gamers wanting to game on the couch. Corsair has since released the K63 as a wireless and more usable replacement for the Lapdog; you can read Jeff’s review here. However, PC enthusiasts aren’t always looking to demonstrate their 1337 skills in the living room, so a full-on lapboard with a mouse and all isn’t always necessary. Oftentimes a simple keyboard and touchpad in a slim package is all that’s needed to effectively interface with a home theater PC (HTPC) or other multimedia device, which is why Corsair recently introduced the K83 wireless entertainment keyboard.

While the K83 isn’t a mechanical keyboard, it has still inherited the brushed aluminum top plate of it’s mechanical keyboard brethren. The bottom of the board is made of plastic, but it is nonetheless sturdy and doesn’t flex. LED lighting has also made its way to the K83, though no RGB blinkenlights. The persistent white LEDs and gunmetal top plate give the K83 a classy look. LED lighting isn’t the best for battery life, but it can be turned on or off with the dedicated lighting button. Even while enabled, the lighting automatically fades out after a short period of inactivity, so as to preserve battery life. Likewise, the entire keyboard will go into sleep mode after long periods of inactivity and requires a key press to wake.

Thanks to the keyboard enthusiast community, there is a rapidly growing list of keyboard layouts, and Corsair is happy to add to that list with a layout devised for the K83. The numpad and center block have been cut completely, while the arrow keys have been compressed and forced to take up residence under the right shift key. However, the relocation of arrow keys displaced the function key, so it moved in between the left control and Windows keys, which is a bit of an odd place for the function key.

The associated F1-F12 keys have retained their spot at the top of the keyboard and have gained a number of additional functions. The top row can be used to switch between a 2.4 GHz WiFi connection and two Bluetooth connections, allowing the K83 to connect to pretty much any multimedia device. Once the K83 is connected to a device, the media key can be used to pull up the default media application. The F1-F4 keys perform additional navigation functions. 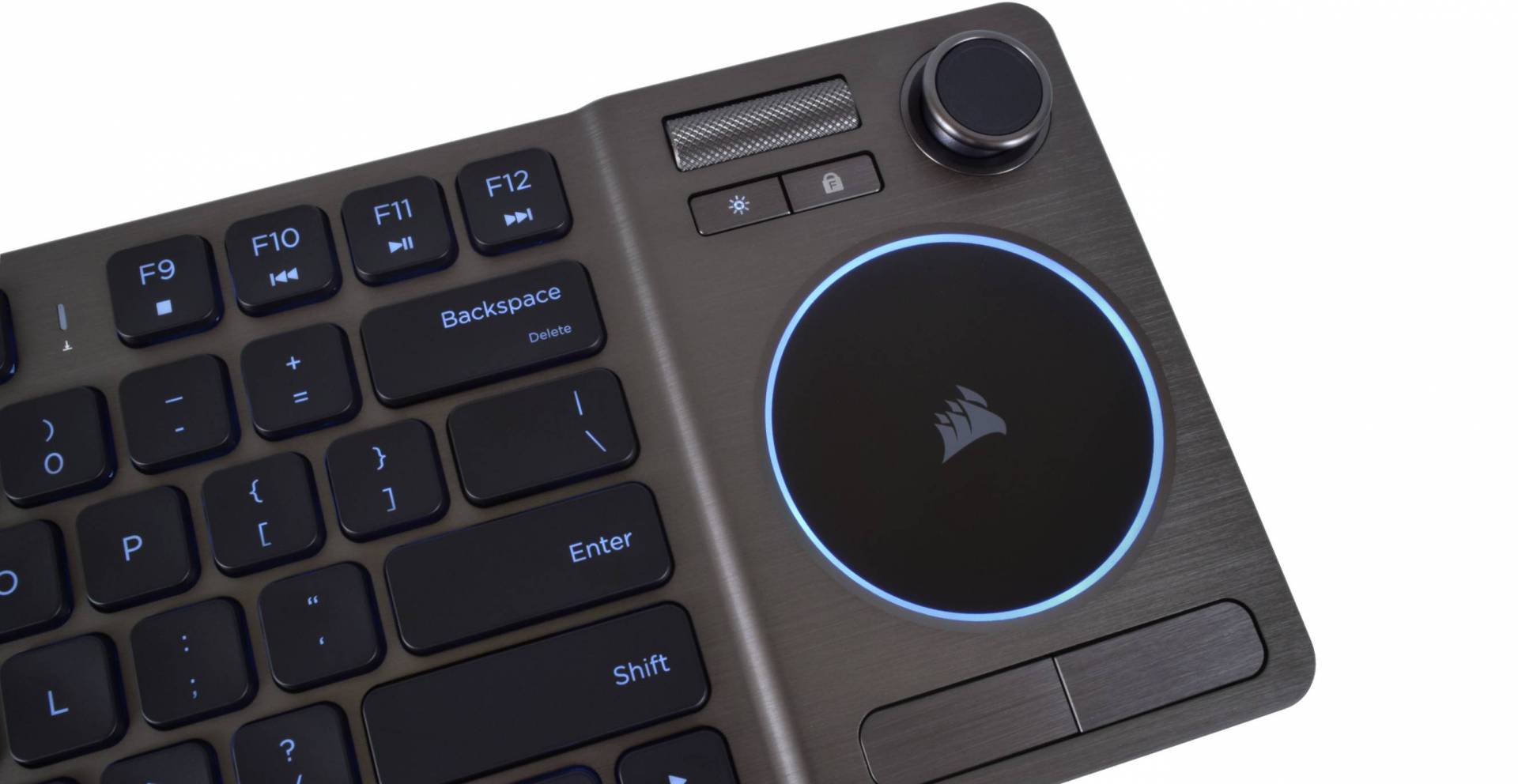 The F9-F12 keys act as media controls, but this is where things get a bit funky. Next to the lighting button is a function-lock button that switches between two modes: media and gaming. While gaming mode is active, the F1-F12 keys will not perform any of the additional functions indicated by the legends, unless control is held down. However, while media mode is on, the F1-F8 keys will default to their alternate functions. Meanwhile, the F9-F12 keys will perform no functions at all, unless a modifier key is held down. You gain access to said keys’ alternate functions by holding down control. The entire top row will act as regular F1-F12 keys if you hold down the function key. Holding down the relocated function key is a bit awkward, but you can just hit the function-lock button instead. What I find so strange is that accessing the media functions requires the control key when the other alternate functions have no such requirement when the lock is disabled.

A set of media controls wouldn’t be complete without some way to adjust volume, so Corsair has fitted the K83 with the metal volume wheel found on its mechanical keyboard lineup. I’m a fan of meaty volume wheels, so I’m happy to see one here, though I’ve expressed many times before my displeasure with the lack of detents in the scrolling action of Corsair volume wheels.

The right side of the K83 has also been outfitted with a touchpad and left and right mouse buttons. The mouse buttons are a good size and sufficiently click, but the touchpad is unnecessarily on the smaller side. The circular, illuminated touchpad does look slick, but there is plenty of surrounding blank space that could be utilized for an expanded touch interface. The touchpad does support multi-fingered gestures, though it isn’t the most responsive touchpad by a long shot. That said, I’ve found that it gets the job done, so long as nothing gets between the wireless transmitter and receiver. 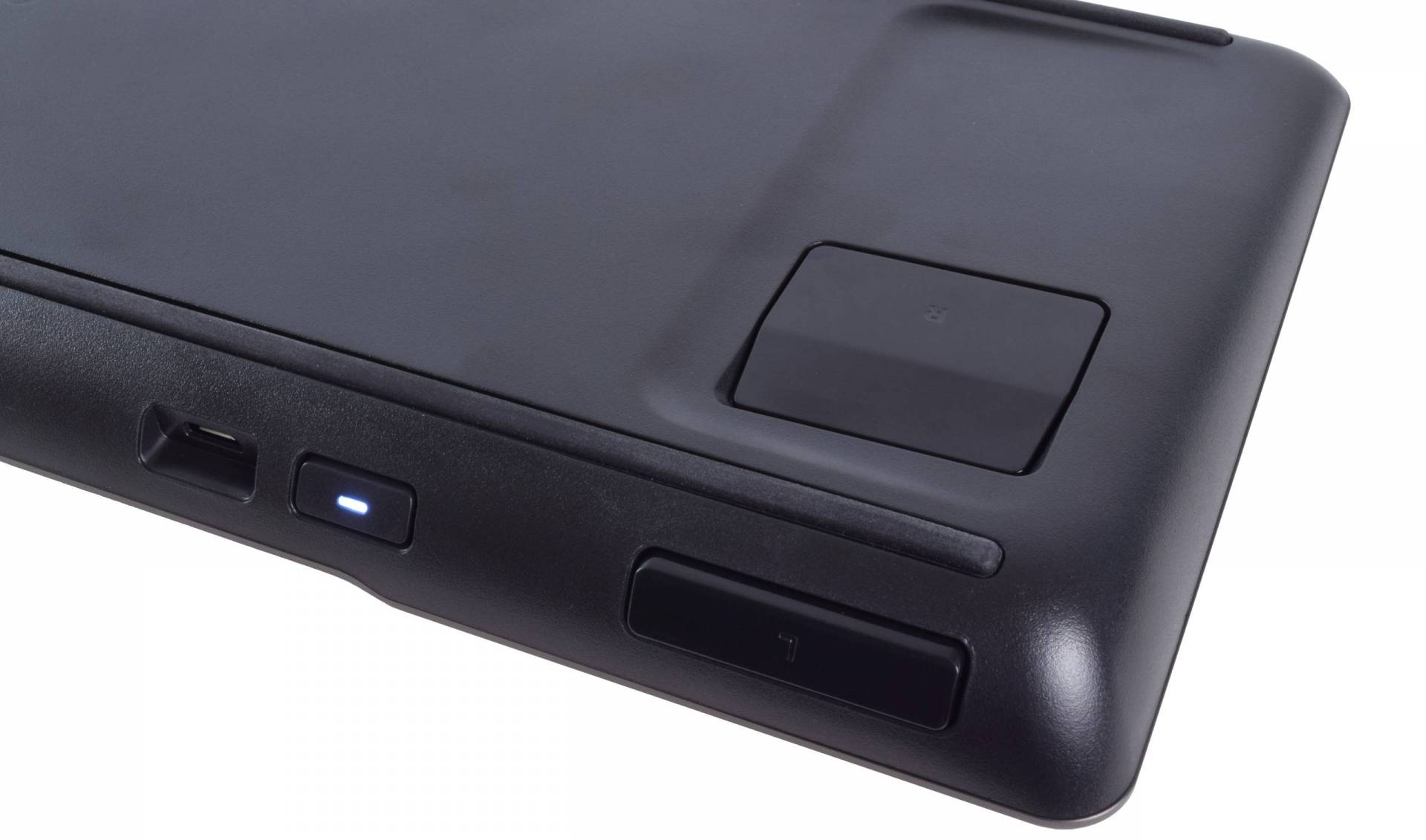 What you may be surprised to see on the K83 is a joystick. The joystick is meant to work in conjunction with two buttons on the back of the keyboard. Both the joystick and rear buttons perform different functions depending on which mode is active. If the K83 is in media mode, the bumper acts as a select button and the paddle a back button, while the joystick acts as a set of arrow keys. Given the natural resting position of your hand on the device and the location of the joystick and rear buttons, I found them to work pretty well for scrolling through webpages, skipping YouTube videos forward and back, and navigating Windows 10 applications such as SoundCloud and Netflix.

While gaming mode is on, the joystick controls the mouse pointer, the bumper functions as left click, and the paddle functions as right click. My joystick skills are pretty abysmal when it comes to precision pointing, so I found the touchpad much less frustrating for directing the mouse pointer. However, those well-versed in precision pointing with joysticks, trackballs, or possibly even ThinkPad pointing sticks, may find the joystick and rear buttons to be a workable alternative to a mouse.