It’s been a while since our last GPU review, and a great many graphics cards have come out since then. A lot has changed around here, too. Because of all the commotion, we haven’t been able to take time out to look at the latest video cards—until now. Thanks to generous support from EVGA, Gigabyte, AMD, and a few friends of the site, we’ve been able to procure a partial set of the latest graphics processors for your perusal. So saying, let’s pause a moment to ponder what the GPU market is like in August, 2019. 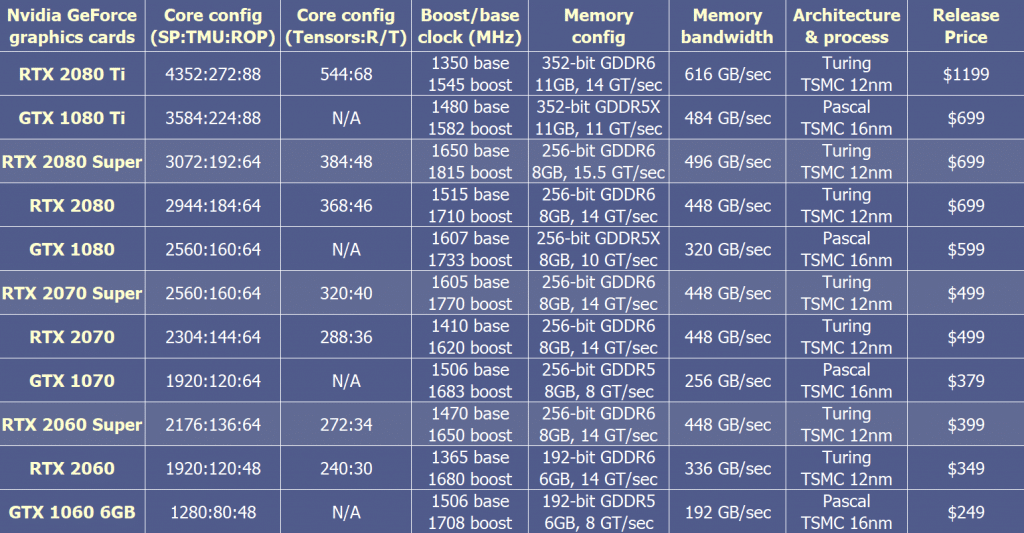 Over on the green team, Nvidia refreshed its extant GeForce RTX series graphics cards with a new line-up affixed with “Super.” I use the term “new” in the most specific sense, because the GeForce RTX Super cards aren’t really all that different from the original recipe. In fact, there are no technology changes whatsoever between the original GeForce RTX series and their “Super” descendants—each card gets a spec bump, and then out the door it goes. Those spec bumps can be pretty significant though, as you can see in the chart above.

The RTX 2080 Super is the least-revised of these chips. It is based on a fully-enabled TU104 processor, but the original RTX 2080 was pretty close to that already, so it only gains two Streaming Multiprocessors (SMs). The biggest change in the RTX 2080 Super is arguably the bump in memory clock, from 14 MT/sec to 15.5 MT/sec. That gives it the fastest RAM on any GeForce to date. Thanks to EVGA for supplying our GeForce RTX 2080 Super XC Ultra card, which has a 30-MHz improved boost clock over the base model.

For its part, the RTX 2070’s “Super” variant steps up from its original TU106 form to that of a cut-down TU104 chip. This change isn’t as drastic as you might expect. Both chips use a 256-bit GDDR6 memory interface, and both top out at 64 render output units (ROPs). The RTX 2070 Super gains 4 SMs, sure, but the biggest change is that the RTX 2070 Super gained 195 MHz of base clock and 150 MHz of boost. In combination with the expanded compute resources, that makes the RTX 2070 Super a solid step up from its predecessor. Thanks to Gigabyte for providing us with our GeForce RTX 2070 Super Windforce OC card. It runs 15 MHz quicker than the reference card, but we think it should be perfectly representative.

The RTX 2060 Super also gains 4 SMs, putting it just two shy of the original RTX 2070 (34 vs. 36). Furthermore, it gains 105 MHz of base clock, but then loses 30 MHz of boost compared to the original card. That’s not going to hurt it much, considering the extra compute resources it has on hand. Its onboard memory also expands from a meager 6GB to a more-standard 8GB, and thanks to that change, its memory bus expands to 256-bit width. Altogether, the RTX 2060 Super is the most-improved of the three models, and that’s why it’s the only one that got a price bump.

AMD knocked it out of the park with its Zen 2-based third-generation Ryzen CPUs last month, but its Radeon team hasn’t been asleep this whole time. The “Navi” GPU core and its “RDNA” graphics architecture actually launched the same day as the third-gen Ryzens—over a month ago—and in that time, we’ve spent quite a bit of ours with the Radeon RX 5700 and RX 5700 XT. These cards are a fair bit different from their predecessors architecturally, so keep that in mind as you compare them on this chart:

AMD went into great detail on the architectural changes in RDNA as compared to the venerable GCN architecture that preceded it, and unfortunately, not being a graphics programmer, a lot of it went over my head. Also unfortunate is that the company claims a 1.5x improvement in performance-per-watt compared to its Vega 64 cards, but I don’t have a Vega card here to test that claim. Still, we can talk a bit about how AMD came to achieve that number.

Naturally, most of the power-efficiency improvements in Navi come down to the move to 7-nm manufacturing. That’s not the whole story, though. AMD says it took the lessons it learned from Zen and applied them to GCN to create RDNA. So saying, RDNA was designed with an emphasis on efficiency and single-threaded performance. AMD specifically mentions a focus on instructions-per-clock (IPC) several times in its briefing, which isn’t a term we usually hear in the context of GPUs.

The short version is that RDNA works on fewer things simultaneously, but in larger chunks. This ends up giving it almost exactly the same theoretical compute throughput as a GCN GPU of similar specifications. As we all know, theory and reality rarely match up, and GCN chips often struggled to even get into the ballpark of their theoretical performance. In practice, the new architecture is 50% faster at the same power budget, according to AMD. RDNA is also fundamentally compatible with GCN, meaning developers don’t have to re-learn how to write applications for the new cards, even if they’re using low-level APIs like Vulkan.

With all of that said, you’re here to hear about how these cards actually perform, so let’s get this show on the road.