Corsair’s HS50 has been its low-end gaming headset for a couple years now, and Eric had good things to say about it. However, the company just recently released the HS35 as its new low-end gaming headset, pricing it $10 under the $50 HS50. As Eric said in his HS50 review, purchasing a headset in the $50 range can be a risky proposition, and the same is even more so true in the $40 range. Thus, it is quite natural to be skeptical of any headset at that price, but at the same time the low price should lower expectations. A $40 headset isn’t going to be the greatest headset in the world, so the question is whether or not the headset is a good proposition at the given price. 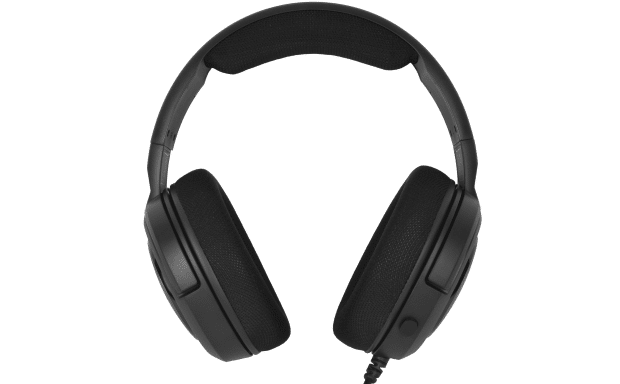 With its HS lineup of headsets, Corsair has taken a step back from the over the top, angular styling of its Void headsets and has moved back towards a more classic, rounded design, of which I am a fan. The HS35 looks clean and classy, particularly in the understated “carbon” color option, though it can be had with red, green, or blue fabric. Said fabric is quite smooth and is backed by a good amount of padding. However, moving up to the HS50 will get you even softer and, in my view, more luxurious-feeling leatherette. 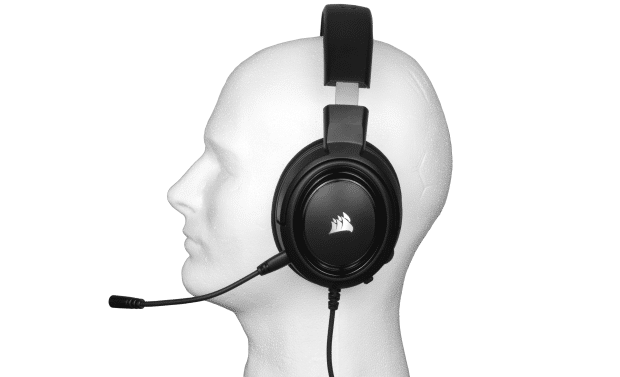 Overall, the HS35 is a comfortable headset. I didn’t feel any discomfort during extended gaming sessions with the headset. The band is surprisingly flexible yet sturdy, and hinges attach the earcups to the band, allowing movement for better conformity to users’ heads. All that said, both the HS50 and HS35 seem to have difficulty accommodating those with large noggins. The band of the HS35 can be extended a total of nine closely spaced notches on each side, and my large-ish head requires the band to be extended to the second to last notches. The adjustment allowed by the HS50 wasn’t enough for a friend of mine, who eventually had to duct tape his headset after it began to fall apart from the strain of stretching around his head. If you have a considerable cranium, it may be that neither headset is a good fit for you. 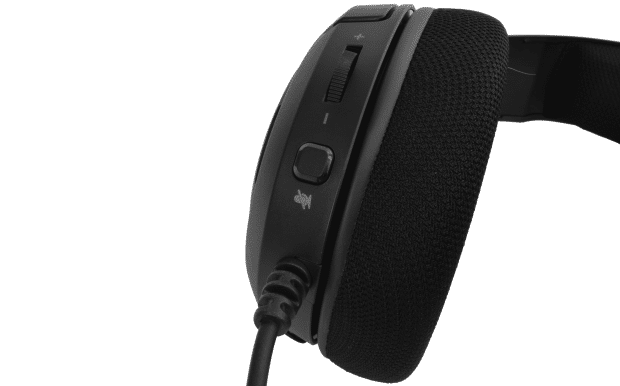 A volume wheel and mute button are integrated into the back of the left can, which is a major positive in my book. I’d much rather be able to reach right up to the volume wheel and mute button integrated into the headset itself, where I know they are, than have to fumble for a dongle somewhere along the cord going from the headset to a connected device. The mute button has a satisfying click when depressed, and it stays depressed until pressed again, so you can tell merely by feel whether the mic is muted. The scrolling action of the volume wheel is somewhat rough, and it lacks detents, but it gets the job done.

Unfortunately the HS35’s rubber cable is non-removable, so you can’t swap it out for a cable of your own. The cable is roughly 6.5 ft (2 m) long, which I found to be plenty for comfortably lounging around my desk. The cable ends in a four pole 3.5-mm jack, and a Y-adapter is included in the box, making the HS35 compatible with most devices. However, depending on the application, you may want to use a USB adapter to eliminate static caused by dirty power

The HS35 has one 50-mm driver per ear, and, according to Corsair, the pair “provides excellent sound quality.” Unfortunately, I did not find said claim to be true, unless excellence is considered relative to price, perhaps. Music sounds muffled and flat through the HS35. Umph is lacking throughout the full range, and instruments and vocals sound mashed together. It’s hard to be disappointed, however, given the price. You can’t expect to find the best sounding pair of cans for only $40. I became accustomed to the sound profile of the HS35 over time, and it didn’t sound so obviously muted as long as I didn’t reset my auditory palate with a better sounding pair of headphones or speakers.

It should be noted that the HS35 is a gaming headset, and it sounded perfectly fine while playing Strange Brigade and Warframe. If you need a cheap gaming headset first and foremost, the HS35 is entirely adequate, and you can certainly get by using it for music consumption as well. That’s about all you can expect at this price range. However, for only $10 more, you could move up to the HS50, which, according to Eric, has some of the muted sound of the HS35, but is still quite good. I don’t have a HS50, but Eric used an Audio-Technica ATH-M50x for comparison, so I think it’s safe to say that it’s worth the $10 extra dollars to get the HS50 if you plan to listen to much music with your headset.

The situation is a bit more positive on the microphone side. The HS35 comes with a detachable mic and a rubber insert to fill the port when it’s not being used. The mic quality won’t blow you away, but my voice comes across quite clear. The clip below includes a sample from an off-brand gaming headset in the same price range that I used to think was good for the price, but the HS35 has made me rethink that analysis. Corsair claims that the HS35’s unidirectional mic “reduces ambient noise,” but from my experience, it picks up a great deal of background noise. However, most major voice chat services nowadays are able to mute your mic when you aren’t talking, so ambient noise isn’t a huge deal. Anyone paying just $40 for a gaming headset should be happy with the HS35’s mic quality.

Corsair’s HS35 is a gaming headset intended for those on a tight budget, and it hits that target pretty much dead on. For $40 you get a comfortable, flexible, and clean looking headset with integrated controls and relatively good mic. The fabric covering the earcups isn’t the nicest, the volume wheel’s scrolling action is somewhat rough, and the drivers have a muted sound, but all that can be largely chalked up to the low price tag. The headset’s only major issue, given the price, is it’s difficulty fitting large heads. However you don’t have a big noggin, and you need a gaming headset that’ll get the job done adequately for only $40, the HS35 will do that.