A quick look at power consumption and efficiency

Power consumption hasn’t really been a sore spot for Ryzen CPUs ever since the launch of the original Ryzens. While AMD’s recent CPUs typically haven’t quite matched the competition in efficiency, they’ve come within striking distance, and that’s a heck of a lot better than Bulldozer’s progeny ever did. Still, there’s always room for improvement. Let’s take a peek at a multi-threaded workload and see how AMD’s latest comes out: 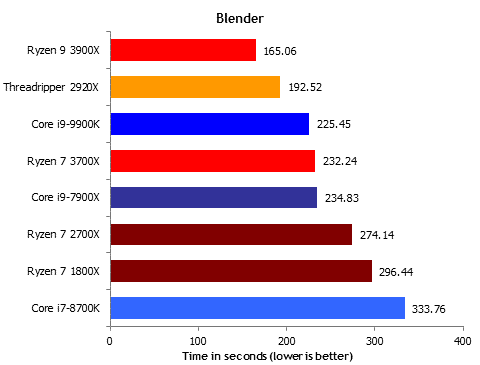 Here we have the time-to-completion for the same Blender benchmark that we presented earlier, reproduced for your convenience. 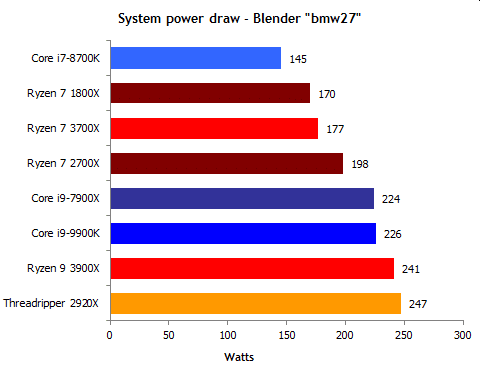 This is a chart of mean momentary power draw during the Blender “bmw27” benchmark. I acquired these numbers by observing my Kill-a-Watt while the benchmark was running, manually recording the highest and lowest values, and then averaging the two. Take note that these are, as usual, total system power numbers measured at the wall. Naturally, then, they include the motherboard, memory, SSD, and graphics card as well as the CPU.

That becomes relevant when talking about the third-generation Ryzen processors, because the X570 chipset is quite a bit more power-thirsty than earlier Socket AM4 chipsets—so much so that AMD’s partners equipped every single X570 mainboard with active chipset cooling. We didn’t have time do extensive idle power measurements, but informally, we observed that our ASRock X570 Taichi with installed Ryzen 9 3900X drew around 85 watts at idle. That puts it in the same ballpark as our X399 test rig with the Threadripper 2920X installed.

Important as it is, instantaneous power draw on its own doesn’t really tell us anything about how efficient a CPU is. Even if one CPU draws ten times as much power as the next, it could still be more efficient if it completes the task better than ten times faster. An easy way to check efficiency is using a measure called “task energy.”

One joule of energy is defined as one watt of power expended over one second. Given that convenient relationship, it becomes trivial to multiply the average power consumption with the task duration in seconds to come up with a reasonable estimate of the task energy of our benchmark. 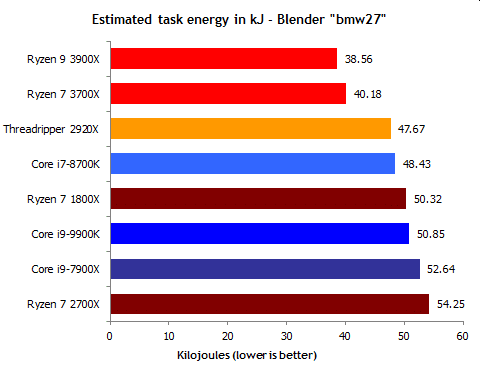 The results for our new Ryzens are nothing short of remarkable. The Ryzen 7 3700X is more efficient than every single other CPU on our test bench, Intel or AMD—save for its even-more-efficient 12-core cousin. AMD is surely reaping the benefits of building these CPUs’ functional elements on a cutting-edge 7nm manufacturing process, but that’s not the whole story. The 8-core, 16-thread Ryzen 7 3700X essentially matches the 8-core, 16-thread Core i9-9900K’s performance despite being a 65W CPU running at a lower clock speed. 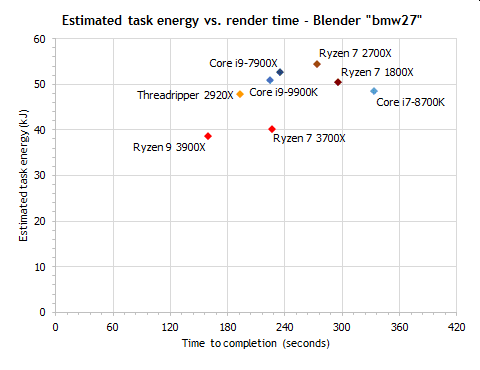 Processors toward the bottom are more efficient, while processors to the left finished faster.

Of course, this is only one benchmark. Making a conclusive, responsible judgment of Zen 2’s efficiency would require further investigation. Still, our tests seem to indicate that AMD’s new Ryzens truly raise the bar for power efficiency.