is grief tech the next big thing in a i
Blog,Software

Is Grief Tech The Next Big Thing In A.I.?

Grief tech is so hot right now. All over the Internet media there are breathless reports of individuals using generative A.I. to chat to their deceased parents, partners or friends. A whole new cottage, or should that be cemetery, industry is slowly blossoming on our doorsteps.

The driver behind this excitement lays of course, at the feet of the mighty artificial intelligence chat engine, GPT-3. Ever since OpenAI released the tool to the world, the Twitterati has gushed over the potential for creating outrageous art, awful music and a variety of cutesy applications in between.

Which leads us again to ‘grief tech’…

Put simply, this involves training any suitable A.I. system on images, recordings, and videos of specific ordinary folk. This material is then used to craft a virtual persona, which can be used by grieving friends and relatives after their death. Creeped out yet? Training can also be done using old social media posts, writings, and even sometimes, interviews conducted before they died. The last is clearly a little weird, but it’s definitely a thing.

Based on the quantity and/or quality of this material, the result is a faithful representation we can communicate with. And which is so much more exciting than a boring old Ouija board. The A.I. fills in any gaps with studied guesstimates and folksy conversation. Hopefully, it’s so well done that we’re fooled for a second into believing we’re actually in the presence of our dearly departed loved one.

These services seems to be sprouting as fast as algae on a moss covered crypt. The first viral mention of the phenomenon was the now famous conversation between a lost fiancee and grieving boyfriend using a commercial GPT-3 service called Project December. Joshua Barbeau used old Facebook posts and text messages to train the AI, and then last year gave interviews to all and sundry about the experience of ‘talking’ to his dead fiancee. It was strangely moving.

Since then, we’ve learned of a bunch of new services which are offering variations on this slightly macabre theme. For example, in what sounds oddly similar to an episode of Black Mirror, Microsoft announced earlier this year it had secured a patent on software that can reincarnate humans into chatbots, opening the door for the use of AI to reanimate the dead.

An MIT Technology Review journalist recently described interacting with a facsimile of her currently living parents using a Californian service called HereAfter AI. The whole thing sounded rather jolly. Similarly, The UK’s Daily Telegraph broke a story back in August of this year, of a UK based AI system called StoryFile, which allowed a grandmother to interact with the mourners at her funeral via an AI powered hologram which answered questions.

The latest generation of this tech, so new it’s not scheduled for release until next year, will combine a full messaging app with a recording service. In this way, You, Only Virtual, intends to produce much more than a mere chatbot. These ‘Versonas’ will recreate the subtle nuances of real custom relationships, one to one. The implication is that this LA based service (where else, indeed) will mimic the exact type of communications to a much finer degree than anything before. 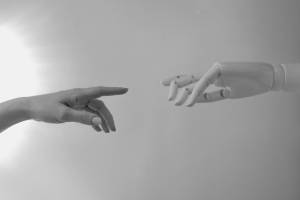 Not all grief tech projects succeed, however. One of the most ambitious projects was Eternime, which wanted to be a personal digital biographer, on-hand to record every aspect of a life as it’s lived. The idea was that once the life stopped, thousands of hours of recording – notes, media, social, video and all – would be used to provide a ‘digital ghost’ of the subject. The project, which sprung out of a 2014 MIT project, underwent several pivots before falling ignominiously into a black hole. It now exists only as a defunct and rather doleful medium page of dreams. So much for digital immortality.

Grief tech is not just restricted to exotic applications. DeepNostalgia from MyHeritage.com promises to bring your old photos to life using AI and some clever fakery. There’s no question that watching the animation of an old black-and-white photo of a great great relative is rather freaky, but we’re not sure that it delivers the same kind of immersive experience of a full hologram or video.

Is Grief Tech A.I. To Die For?

No matter what end of the spectrum, these AI systems have a lot of hurdles to overcome if they’re ever to become a part of the global human fabric. For one thing, they’re hardly cheap. Starting at around $10 a month, and topping out at an eye watering $499, these are not services for everyone. Then there’s the effort involved. Eternime apparently failed because not enough people could be bothered to maintain the chore of record keeping, and it seems likely that future applications will also have to face the fact that humans are lazy at best, and downright stubborn if pushed.
Finally, of course, there’s the ethical question.

Big tech has become increasingly wary of unleashing large scale artificial intelligence systems, in case the user base starts to do unpleasant or illegal things with it. Deep fakes are just one part of the problem. Grief tech services, for example, could just as easily be used to digitally ‘stalk’ living people. Celebrities, ex partners, your old boss. The mind boggles, even before we start considering the question of permissions, privacy and ethical issues.

So… grief tech is here, it’s a thing, and it seems there may be a market for it. But that’s no certainty. As a species, we have an extremely mixed and uneasy relationship with death, which implies that there may be increasing opposition to the idea of manipulating it in this manner. Especially through the use of large language models which are nothing more than glorified document scanners.

We can imagine the headlines when the first suicide occurs, perhaps triggered by obsessive exposure to a digital replica of a loved one. No matter how many positive benefits the marketeers see in a possible AI future, there are always going to be the unintended consequences which may literally come back to haunt us.

Maybe we should be listening a little closer to the wisdom of our ancestors?