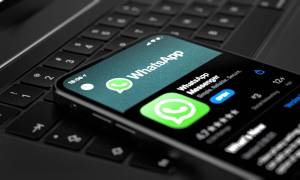 In a tacit acknowledgment that local is the new global, WhatsApp has today rolled out its new Communities feature. This new service was extensively described by WhatsApp earlier in the year, and has now gone live. WhatsApp will roll out the service slowly around the world over the coming months, having already tested over 50 organizations in 15 countries over the past seven months.

Is this the future of social communication?

To access Communities, users and admins can tap on the new Communities tab at the top of the WhatsApp chat screen on Android (bottom of the screen for iOS). From there they can start a new Community from scratch or add existing groups.

The new service builds on the existing Groups function by providing a raft of new features which let communities communicate publicly and privately in an encrypted shared space. Unlike Groups, which can only handle one group of people, a Community is by definition composed of several sub-groups. So, for instance, an Amateur Dramatic community could include different sub-groups covering acting, finance, marketing and suchlike, all under the same chat umbrella.

The idea of building community chat systems is not new. Nextdoor is probably the most successful of the neighborhood community sharing services. It’s clear that WhatsApp has recognized the need for a more sophisticated service, catering to different groups like workplaces, schools, or even small businesses.

Having a public group chat solely dedicated to talking to customers, while having a private employee section for scheduling and suchlike, is something that’s bound to be interesting to small firms struggling to manage their business comms. Once someone is inside a Community, they can move between sub-groups at will, which is also a significant feature to improve chat flexibility. 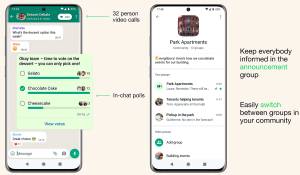 The new service comes with useful admin functionality, such as community announcements, moderation across groups, and the provision of community voice chats with up to 32 people, and groups with up to 1024 participants. A new feature which will please many members is the chance to create in-chat polls, to quickly gauge reaction to an idea or proposal. File sharing has also been massively improved, with files of up to 2 gigabytes being supported.

The company stresses that the new service is different to existing community offerings like Facebook Groups, because it’s based around existing relationships via our phones. This makes it much more personal, because you cannot have an anonymous participant in a community, they are all just a phone call away from a Community admin.

Privacy by design – to protect users from scams and misinformation

WhatsApp is also relying on its end-to-end encryption to offer an extra layer of security and privacy, to give members extra assurance. That all Communities will be private by default is also key. This means that strangers cannot browse Communities or discover new ones, they will have to be invited specifically to join. It’s an interesting departure from the traditional social media goal of scaling up membership numbers far and as fast.

There are several other features which have been included which are clearly based on tester feedback. The idea that you can only forward messages to one group at a time inside the community is designed to protect against spam or misinformation issues which Groups suffered from. Finally, there is a specific privacy feature which will hide your phone number from the community at large. It will only be visible to Community admins and those members of your own specific group.

The crucial issue of abuse is obviously likely to be an issue, and here WhatsApp is less clear about how it will manage. Because of the end-to-end encryption, individual messages will be hard if not impossible to track, so the company is relying on admins and publicly available information, such as community name and description, to provide alerts. This is clearly far from ideal, and the company will inevitably have to fall back onto user reports to track and tackle any problems before they cause too much damage.

The makers of ChatGPT, OpenAI, have released a classifier to help people determine whether text was created by AI or a human. The tool could help mitigate false claims that...