Generative AI developer Stability AI has released Version 2.0 of its powerful open-source AI art generator, Stable Diffusion. The new software builds on the incredibly successful first version, which has become one of the most popular open-source projects in the world.

Stable Diffusion blew the doors off the generative AI art world by releasing it into the wild in an open-source format. Previous AI art platforms, from companies like OpenAI and Google, were strictly controlled under commercial lock and key.

However, once a free and open version arrived on the scene, the floodgates opened as developers and enthusiasts across the world started building interesting new applications.

Creating Art From Bits and Bytes

Generative AI uses pre-trained ‘models’ to capture a vast amount of data relating to art creation, styles, and formats. This data is all culled from publicly available information which can be found in galleries, encyclopedias, and forums on the web.

Once the data’s captured, the software — typically based on the Python programming language — then uses a sophisticated system of machine learning to produce new works of art on demand.

The key thing is the art is created by the user entering in plain text ‘prompts’. So, for example, a user could type ‘a white cat sitting on a sofa’ and the Stable Diffusion code will take the text and create an image that meets the request.

Developers are releasing new versions at a blistering pace.

What makes Stable Diffusion special — and what sets it apart from other forms of AI art systems — is the speed at which it’s being developed. Version 1 of the software was only released 90 days ago, on the 22nd of August, and it’s already dominating the AI art development space.

Unlike other systems, such as DALL-e and Midjourney, Stable Diffusion doesn’t have to be run on huge computer systems or on the cloud. Copies of it can be downloaded and used on a local computer, which makes it perfect for hobbyists and small businesses.

The team behind the technology, which includes the Ludwig Maximilian University of Munich and the Stability AI company, raised $101 million last month to accelerate the development of the platform. As a result, third-party developers are currently hard at work releasing various versions at a blistering pace. 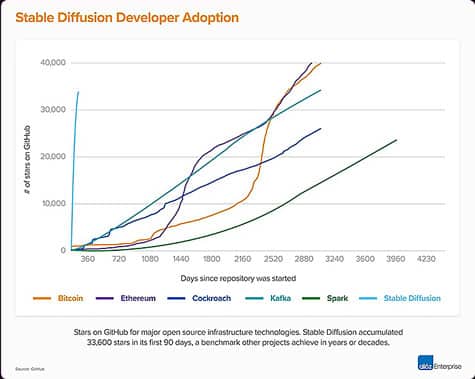 Versions to connect with Photoshop, Blender, and other conventional art and image services are already available. However, the race is on to deliver a truly ‘consumer-friendly’ application, which will take the technology to the next level in terms of adoption.

One of the products which are closest is the free Windows-only app, ArtRoom. This fledgling project offers both an online and a downloadable version of Stable Diffusion, which can be installed and used by anyone with bare minimum computer skills and a modest computer.

The release of Version 2.0 is expected to accelerate the adoption of the technology even further. There’s already been crude, but impressive attempts to use the software to create video animations.

At present, these are generally low quality and extremely random in output, but once again, the speed of development is truly breathtaking. A mere 90 days ago, none of this existed, and yet now this kind of content can be created.

As with all new technologies, there are also downsides that need to be taken into account. For one thing, the industry is still grappling with recognizing the rights of artists whose styles have been used for AI training.

There’s also the case of illegal and unsuitable content. There’s a lot of work behind the scenes to try to manage these issues. This is why Version 2.0 has shipped without artist styles included and with a stringent set of blocks against pornography or adult material.

Whatever the future, AI art is here to stay. The release of a free and open-source product has transformed the landscape in ways that nobody could predict.

The genie is out of the bottle, and if things have moved this fast in 90 days, goodness knows what’s waiting down the line in 2023 and beyond.