whatsapp rolls out message yourself feature for notes
Software

WhatsApp Rolls Out Message Yourself Feature For Notes 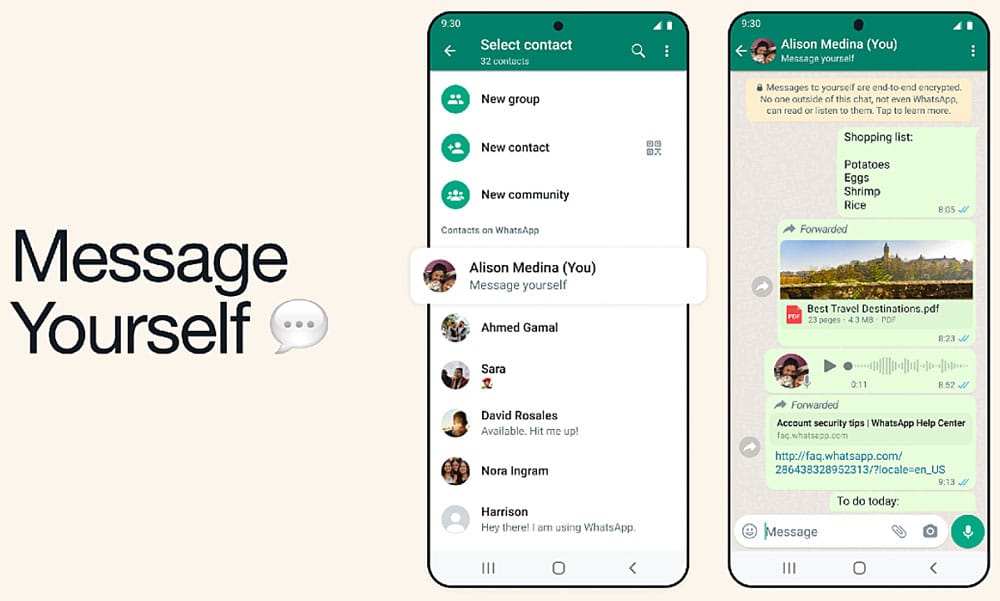 WhatsApp is about to roll out an update which includes a Message Yourself function. This new feature will let users send a message to themselves. Why, you ask? Well, it’s a neat way to send yourself reminders, shopping lists, notes and other cool stuff. The idea is basically a chat selfie, using the platform to keep track of things you need to remember.

A quick and easy way to send notes to yourself

Apparently, the feature has been under test with beta testers since the end of October, and now Meta has decided to release it officially into the world. While it has always been possible to send chats to your own phone number, accessing them on Android wasn’t easy. The new features build in the self chat as a default.

Once the rollout has reached their phone, users will be able to see and access their own name at the top of the contacts list when they go to create a new message. Once they’ve selected their name, they will be able to send themselves a message.

Notifications can also be set to use as a reminder, and chats can be pinned to the top of a thread list for quicker access. To pin a chat thread, press and hold the chat and select the Pin icon at the top of the screen.

WhatsApp Is A Little Late

It’s not really clear what advantage this gives over the popular cheat, which is to set up a group with only yourself as the member. This serves as a perfectly adequate store of any content you may wish to store on the phone. Or indeed share between phone and desktop using WhatsApp Web.

The only real advantage of the new release seems to be the permanent accessibility of the option at the top of the contacts list, which is admittedly more handy for daily use. To use the new feature, fire up WhatsApp and then click on the round green action button at the bottom right of the screen. That will bring up a contact list screen, and your name should be at the top of the page. Select it and send the message as normal.

Moving files, videos and audio between devices using the WhatsApp platform will now become much easier. It’s strange that it’s taken Meta so long to install this setting. Signal has a Note to Self feature, which offers the same functionality. However, it’s more hidden in the contacts section (although it does sport a nice Blue checkmark just like Twitter).

Business app Slack also has its own Jot Something Down space for users, and even Telegram has a Saved Messages area which they bill as ‘Your cloud storage’, and which can be used for forwarded messages and multimedia content. Anyway, better late than never, as they say.

The update is scheduled to be distributed on Android and iOS over the coming weeks.